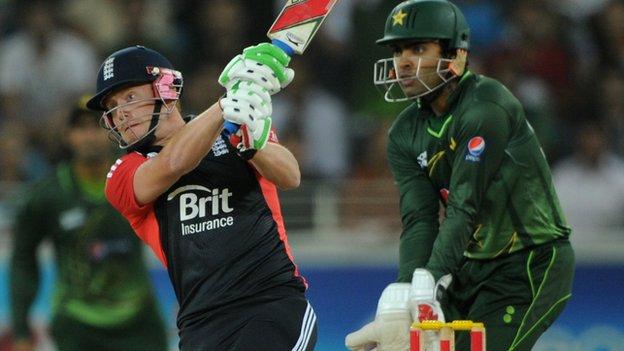 Jonny Bairstow's unbeaten 60 and a fine bowling performance propelled England to a 38-run win over Pakistan in the second Twenty20 international in Dubai.

Arriving when England had lost three wickets in as many overs, Bairstow helped the tourists to 150-7.

England's seamers then reduced Pakistan to 32-4, and although some middle-order hitting gave them hope, the hosts eventually tumbled to 112 all out.

The series is level at 1-1, with the decider in Abu Dhabi on Monday.

That England will go into the third game with the chance to win the series is down to the efforts of Bairstow, which were then backed up by the pace trio of Steven Finn, Stuart Broad and Jade Dernbach.

"We should be in for a cracker of a game in Abu Dhabi on Monday. England have been superb, looking focused and wanting to win this game. They've won by a big margin and that makes a big difference for your confidence. They lost the first T20 game but today they've pulled it back and they will feel confident that they can do it again in Abu Dhabi."

England were also superb in the field, with several spectacular catches and a sharp run out by Finn.

"In the field we were faultless," captain Broad told BBC Test Match Special.

"I think we put one half chance down but if you have that sort of fielding display it really does put pressure on the opposition and I think Pakistan felt that."

England had looked well-placed to win the first game of the series on Thursday before some poor middle-order batting and excellent death bowling by Umar Gul saw them fall short.

With that failure fresh in the memory, Broad opted to bat first when winning the toss, but a good opening stand of 35 between Craig Kieswetter and Kevin Pietersen looked set to be wasted when England wobbled at the end of the powerplay.

Pietersen was fluent for his 17, but after he swept Saeed Ajmal to short fine leg, Ravi Bopara and Eoin Morgan both fell cheaply.

It was left to Kieswetter and Bairstow to rebuild, and the Yorkshire right-hander - without a boundary in his 21-ball innings in the first meeting - allowed no such shackles to restrict him on this occasion.

Primarily looking to play the Pakistan spinners off the back foot, he found success with pull shots through mid-wicket but also was able to launch Shahid Afridi for a straight six before waltzing down the track to hammer Ajmal through the covers for four.

When Kieswetter holed out to long-off, Bairstow dominated a stand of 39 with Samit Patel, who made 13, and may have taken England to a greater total had they not lost regular wickets in the final five overs.

However, he was able to hammer the penultimate ball of the innings from Gul for six over long-on but at the interval there were doubts that England had posted a winning total.

Those doubts began to subside when the tourists' pace bowlers tore through the Pakistan top order - most notably when Umar Akmal, who had launched Finn over deep mid-wicket for six, was well held by Eoin Morgan at point from the next ball.

Graeme Swann had Misbah-ul-Haq caught at deep mid-wicket, but when captain Broad looked for overs from Bopara and Patel, Shahid Afridi and Hammad Azam counter-attacked.

Afridi launched Patel for a huge straight six into the top tier of the Dubai International Cricket Stadium, before Azam hit Bopara over long-off for a maximum.

But Bopara would have his revenge, Jos Buttler taking a good catch at long-off after Azam sliced the ball high into the night sky.

By hammering Finn for four and six in successive deliveries, Gul threatened to continue the Pakistan recovery, but after he skied the same bowler to wicketkeeper Kieswetter, Ajmal was run out by Finn.

Facing a lost cause with 39 needed from the final two overs, the dangerous Afridi was last to fall when he mis-cued the England captain to Morgan at point.

"The great thing is we don't have to rely on bowling or batting first," he added.

"We know we have the skills to do both and the responsibility in both batting and bowling line-ups to throw the first punch."