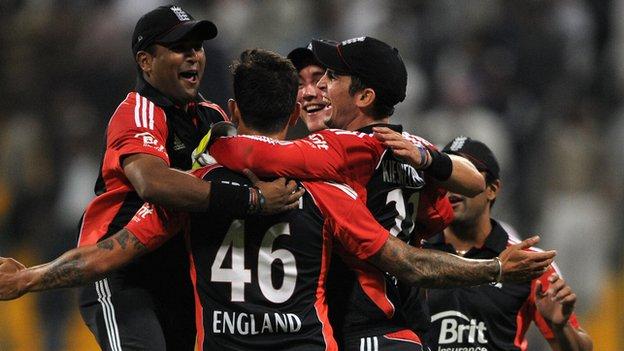 England claimed a dramatic five-run win over Pakistan in the third Twenty20 international to take the series 2-1.

On a slow Abu Dhabi pitch, the tourists were indebted to Kevin Pietersen as they again struggled to cope with Saeed Ajmal, who took 4-23.

We held our nerve at the end. I'm excited about how this team is shaping up

Pietersen made an unbeaten 62 in their 129-6 - and was then supported by a superb display by England's bowlers.

Added to the 4-0 one-day series victory, triumph in the shortest form of the game provides England with further comfort following their humiliating 3-0 whitewash in the Test matches.

And, in their last T20 match in Asia before the squad is chosen for September's World Twenty20 in Sri Lanka, Stuart Broad's men will draw confidence ahead of the defence of the trophy they won in 2010.

However, questions will remain over England's ability to make runs against quality spin bowling, with only Pietersen - aided by a late cameo from Samit Patel - able to combat the magical Ajmal.

Strong on the leg side early in his innings, the Surrey right-hander was forced to rein in his attacking instincts and bat with restraint as England faltered in the middle overs.

His only mistake came when he sent back Eoin Morgan after initially calling his partner through for a single, leaving the Dublin-born batsman short of his ground despite a despairing dive.

"This has been a fine performance. It wasn't a huge total to defend and the England bowlers have outdone themselves. It's been a complete change from what we saw in the Test series. They've looked a completely different side, all the youngsters want to establish themselves in the team which has lifted the performances of everyone."

That ended another struggle for the left-hander, who should have been stumped and offered a chance that fell short of mid-off. He will now sweat on his place in the squad for the Test series in Sri Lanka.

Morgan's exit came prior to a spell in which England went 33 balls without finding the boundary, during which time Ajmal removed Jonny Bairstow and Jos Buttler.

The shackles were broken by Patel, who launched Ajmal for a straight six and then, next ball, inside edged for four.

After he was stumped trying to repeat the dose, it was left to Pietersen to add late impetus by swinging Aizaz Cheema's waist-high full toss for six off the final ball of the innings.

When Pakistan replied, England got the start they wanted, Dernbach having Mohammad Hafeez caught and bowled but, with Pakistan needing little more than a run a ball, they were able to build slowly through Asad Shafiq and Awais Zia.

It's difficult in T20 cricket because you have to change gears. I got that right today

However, after Graeme Swann trapped Zia lbw, the pressure applied by England's bowlers told when Shafiq was run out attempting a second by Buttler's accurate throw from the deep.

Still, Pakistan were able to make steady progress and needed only 17 when Broad began the penultimate over of the series.

The accuracy of the England skipper would prove crucial as, after two dots, Umar Akmal holed out to mid-off.

That brought Shahid Afridi to the crease but the only runs Broad conceded came when Bairstow let Misbah's slog through his legs for four at long on.

With 13 required off the final over, victory was still not entirely out of Pakistan's reach.

But when Misbah, who found the boundary only twice in his 32-ball stay, was asked to clear the ropes from the final ball, he could not match the brilliant Pietersen.