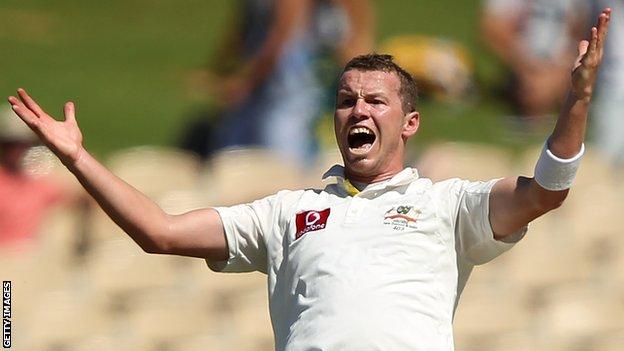 Despite that, he has only played two international T20 matches in which he has collected three wickets at a cost of 19.33 runs each.

The deal is still subject to clearance by Cricket Australia but this appears to be a formality and Siddle will join up with the rest of the Essex squad in time for the opening T20 game against Surrey at The Oval on 13 June.

"Australia are looking keep him fresh for their schedule and for Peter, this will be a chance for him to enhance his one-day skills," said Grayson.

"With Tim Southee not coming back, it leaves us light in our bowling line-up so it will be good to bring him alongside Graham Napier.

"We are all very excited to be bringing in a world-class bowler for our FL t20 campaign."

Siddle made his international debut in India in 2008 and is now ranked the fifth best Test bowler in the world.

He took 20 England wickets during the 2009 Ashes series and although he only managed 14 when the two sides met again in 2010-11 showdown, they included a hat-trick and Test-best figures of 6-54 during the opening game in Brisbane.

The right-armer enjoyed his most successful series this winter, taking 23 wickets at an average of 18.65 in a four-Test whitewash of India.