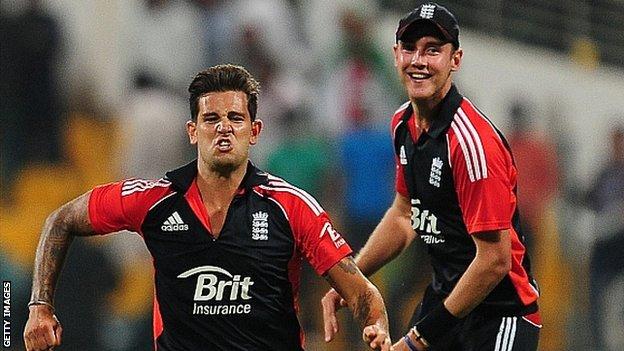 England captain Stuart Broad praised the team's resolve after they bounced back from a 3-0 Test defeat by Pakistan to win the one-day and Twenty20 series.

England won the decisive third Twenty20 by five runs to build on their 4-0 triumph in the one-day series.

"I think we showed great character to come back from those Test defeats and win the one-day series," said Broad.

"Nothing makes up for losing games but it's given us a lot of confidence over where we're going in one-day cricket."

England looked to be heading for a defeat in the third Twenty20 in Abu Dhabi when Pakistan reached 107-3 after 17 overs in pursuit of a modest target of 130.

ENGLAND IN THE UAE

But some brilliant death bowling by Broad and Jade Dernbach turned the match around.

Broad only conceded four runs from the penultimate over to leave 13 required from the last and Dernbach bowled Pakistan skipper Misbah-ul-Haq off the final ball of the match when a six would have won it for the hosts.

"If you are positive in your processes and stick to what has brought you success then there's no reason to doubt yourself," Dernbach told Test Match Special.

"I've been entrusted with the job to bowl at the end and I'm thankful I was able to perform that role."

Broad paid tribute to Dernbach and enthused about the way his Twenty20 team is developing ahead of the defence of their World Twenty20 trophy in September.

"This has been a fine performance. It wasn't a huge total to defend and the England bowlers have outdone themselves. It's been a complete change from what we saw in the Test series. They've looked a completely different side, all the youngsters want to establish themselves in the team which has lifted the performances of everyone."

"Jade will always play himself down but I thought he was absolutely magnificent," said Broad.

"I'm very excited about the way this team is shaping up. If we start to click towards our lower middle order and get some boundaries, we have a hugely exciting team and the way we have bowled has been exceptional."

The task facing England's bowlers would have been even sterner without a fine 62 from Kevin Pietersen, who became only the second man to carry his bat through a completed T20 international innings.

Pietersen said his resurgence in the limited-overs series after a miserable time in the Tests was down to hard graft.

"I started slowly but then got back into the swing of things," he told TMS.

"It just proves that with hard work and dedication, hours of sweating and putting intensive training into simple things you reap the rewards.

"Test cricket is my favourite so I will definitely leave the UAE very disappointed, but to win the one-dayers 4-0, and then this, has been magnificent."