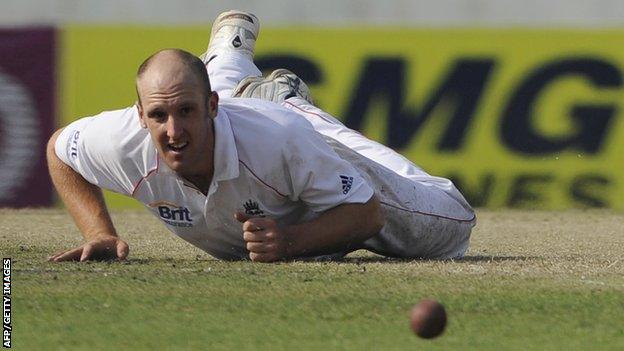 Kent's James Tredwell believes he can force his way into the England Test side on the upcoming Sri Lanka tour.

Tredwell was one of four spinners selected for the tour but is not content simply to make up the numbers.

The 29-year-old told BBC Radio Kent: "I'm going out there to get my name in that first XI.

"If I go out there thinking I'm just there as cover, then if I do get a chance, I will not be in the greatest frame of mind to put in a performance."

When the squad was announced, national selector Geoff Miller said Tredwell would act as cover for fellow off-spinner Graeme Swann, with all-rounder Samit Patel the back up for slow left-armer Monty Panesar.

But the Ashford-born player, who took six wickets in his sole Test appearance in Bangladesh two years ago, feels he can challenge Panesar for the second spinner's spot in the team.

"Ultimately, if I'm performing better than him in practice and warm-up games then I've got as good a chance as anyone else to be selected," he said.

"I am there as cover but if conditions allow, you never know."

Tredwell was aware he remained in the selectors' thoughts following a phone call from head coach Andy Flower at the end of last summer.

"That sort of put me in the picture about where I stood and kept me driving on, kept me training over the winter," he added.

"I had a thought in the back of my mind that my name might get picked out at some stage, but I had no idea it would be now."