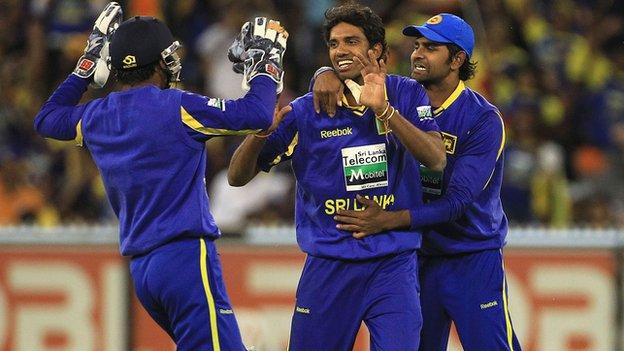 Sri Lanka claimed a dramatic nine-run win over Australia to reach the final of the one-day tri-series.

Chasing 239 to win, Australia were bowled out for 230 in Melbourne, with Lasith Malinga taking 4-49.

But, with the hosts needing 10 from the final over, Nuwan Kulasekara had David Hussey (74) caught at long off to send Sri Lanka through and knock out India.

India had kept their hopes alive by chasing down 321 inside 37 overs against Sri Lanka on Wednesday, and needed Mahela Jayawardene's side to lose without picking up a bonus point in order to progress.

After winning the toss, Sri Lanka were making good progress when Dinesh Chandimal (75) and Kumar Sangakkara (64) added 123 for the third wicket.

But, after both men fell to James Pattinson, Christian ran through the lower order.

His hat-trick sequence began when Mike Hussey held a remarkable catch to remove Thisara Perera on the midwicket boundary.

Knowing his momentum would carry him over the rope, Hussey threw the ball in the air, then jumped back inside the boundary to complete the catch.

In pursuit of their victory target, Australia looked to be well placed when Shane Watson (65) and Mike Hussey added 87 for the fourth wicket.

But, with Jayawardene juggling his bowlers, the home side slumped to 187-8, needing 52 from the final seven overs.

David Hussey kept them in it, and looked set to lead his side home when he launched Rangana Herath for a straight six at the beginning of the 48th over.

But, after Xavier Doherty was deceived by a Malinga slower ball, Hussey needed to find 10 from the final over with only last man Ben Hilfenhaus for company.

He was not up to the task, putting Sri Lanka through to the best-of-three finals, which begin in Brisbane on Sunday.