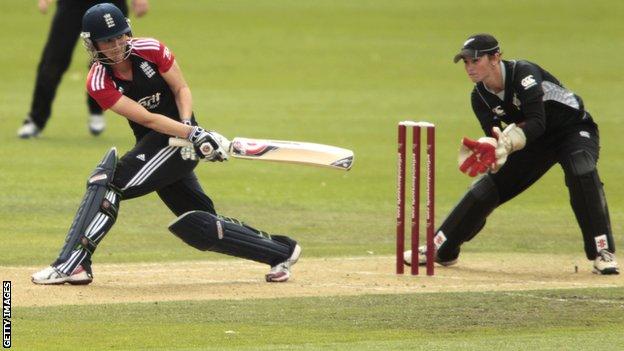 Captain Charlotte Edwards made an unbeaten 137 as England beat New Zealand by 59 runs to win the second one-day international and complete a series victory.

She hit 20 boundaries as the tourists rattled up an imposing 219 for six from a rain-reduced 26 overs.

The hosts never got close to England's revised 223 total at the Bert Sutcliffe Oval and were all out for 164.

New Zealand won the toss and chose to bowl first, but were soon made to regret the decision as Edwards got about the bowlers.

She enjoyed a particularly fruitful second-wicket stand with Sarah Taylor as the pair added 98 in 62 balls.

Edwards' ton came from 70 deliveries as the hosts were set a revised score they were never likely to surpass.

"We went out there with a mindset of Twenty20 cricket and it paid off," said Edwards.

"There were some great contributions from Sarah Taylor (39) and Laura Marsh (15) and it was great to contribute myself. I feel I'm in the form of my life.

"I'm really pleased with how we performed in difficult conditions and to take another great series win, that's what we came out here to do and we've achieved that in style."

The only New Zealand resistance came from Amy Satterthwaite who made 69 before she became medium-pacer Shrubsole's third victim in the penultimate over.

Spinner Laura Marsh finished off the Kiwis in the final over, bowling both Morna Nielsen and Lea Tahuhu, as England went 2-0 up in the series with one match left to play, also at Lincoln on Monday.