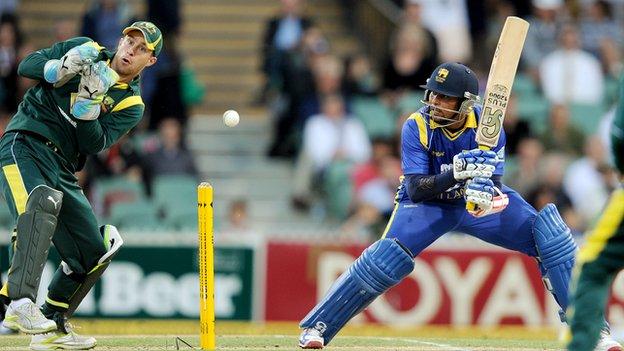 Earlier, both David Warner and Michael Clarke hit hundreds to take Australia to 271-6.

But Sri Lanka got home with 34 balls and eight wickets to spare to set up a decider on Thursday.

The way the visitors cantered to victory was partly down to Australia's wayward bowling display - Brett Lee bowled three wides in his first over and Clint McKay had Jayawardene caught behind off a no-ball.

It proved costly as the Sri Lankan openers took the game away from the hosts, although Jayawardene should have been given out in the 25th over when he clearly nicked Shane Watson to wicketkeeper Matthew Wade.

At that point, it looked as though Sri Lanka would overhaul Australia without loss, but the stand was broken when James Pattinson trapped Jayawardene lbw.

Dilshan completed his century and, after he holed out on the leg side off Lee, it was left to Kumar Sangakkara and Dinesh Chandimal to complete the run chase.

The efficiency of the Sri Lankan batting display was in sharp contrast to their display in the field as four dropped catches and some sloppy ground fielding aided Australia.

Clarke (117) and Warner (100) provided the bulk of the runs with a third-wicket stand of 184 as the home side recovered from the losses of Wade and Watson.

Warner found the boundary only five times, including one six, in his 140-ball stay, leaving Clarke to try to add some late impetus when he took 23 off one Farveez Maharoof over.

In the same over, Sri Lanka captain Jayawardene remonstrated with the umpires after a full toss was belatedly called a no-ball, dissent that caused him to be fined 10% of his match fee.

"However, when Sri Lanka was facing a downturn trend during the last few months, I always maintained that it was due to the internal politics within the team.

"So we did all the changes that were necessary; we created a new team under a new captain, new manager, new coach and new select team. After that under a very good captaincy the team is sorting out those issues and young players are given due respect. The past is the past, I believe Sri Lanka will win the series."