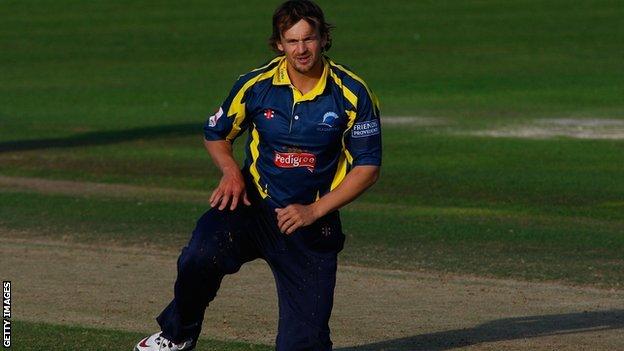 Gloucestershire captain Alex Gidman will not move brother Will up the batting order ahead when the new County Championship season starts.

All-rounder Will scored over 1,000 runs and took 50 wickets in his first season at the club, but Alex is confident he knows his best position.

"Will's benefited from a tired bowling attack and an old ball on flat wickets," he told BBC Gloucestershire.

"I think it's very likely that he will bat at six or seven."

He continued: "Don't get me wrong, he still scored the runs and that was amazing but if people start thinking that he's got to bat at number three then that's unrealistic.

"We need him scoring the runs he did at a very similar position. He won't be down at eight. At six or seven he's a very dangerous batsman and that's where we want to keep him.

"One of the reasons he scored the amount of runs he did was because of the work and the time in the game that the top four, five or six did.

We're short of a couple of senior players, we know that. The cavalry aren't coming.

"Our openers didn't destroy teams but they did chew up a huge amount of balls and made things tricky for people."

After experienced pair Jon Lewis and Chris Taylor left Gloucestershire in the off-season, skipper Gidman is hoping he and New Zealand-born Hamish Marshall can fill the void and pass on their know-how to a youthful side.

"We're short of a couple of senior players, we know that. The cavalry aren't coming. Nothing is going to miraculously happen over the next week or so to change that, we've just got to deal with it.

"I'm never going to get the wickets Lewis got and Chris scored a lot of runs last year but myself and Hamish will back ourselves to score big runs. All we can do is take care of our own performances, we've got to pass on our knowledge and our experience and see where it takes us.

"We've got to try to get these guys's confidence up, hopefully a couple of decent performances will help with that and we will see what this group are capable of."

Gloucestershire start the new campaign at the County Cricket Ground when they take on Chelmsford on 5 April.