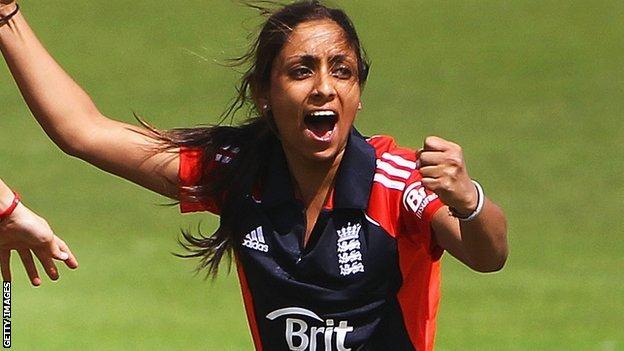 England pace bowler Isa Guha, 26, has retired from international cricket, but will continue to play for Berkshire.

She became the number one bowler in the world rankings in 2008, and was a World Cup winner with England in 2009.

"Playing for England has meant everything to me but it feels like the right time for me to step away from the international stage," Guha said.

"The levels of commitment have become even greater which is testament to how the women's game has developed, and after 10 years of prioritising cricket it's now time to think about my future outside the game.

"I'd like to thank my family and friends for their continual support over the years and to all those involved in helping me develop as a cricketer of which there are too many to mention.

"I have thoroughly enjoyed playing for England and will take many memories with me such as winning the Ashes in 2005, the World Cups in 2009 and our most recent whitewash on our tour in New Zealand.

"It has been a pleasure to play alongside some truly special cricketers and to see them grow as players. The current squad is the strongest I have ever been involved in and I hope they continue to lead the way in world cricket."

Born in High Wycombe, biochemistry graduate Guha took 101 wickets in 83 one-day internationals, and was a regular in England's squad for more than a decade as they established themselves as the leading side in women's cricket.

England captain Charlotte Edwards wrote on Twitter: "Was a pleasure and privilege to play with you over last 10 years. Congratulations on a wonderful career, we will all miss you!"

Former skipper Clare Connor, now the England and Wales Cricket Board's head of cricket, added: "Isa has made an enormous contribution to women's cricket on and off the pitch and her retirement comes as sad news to us all.

"Her professionalism, dedication and energy have played a significant part in the journey that the England women's team has been on, culminating in the most successful period in their history.

"Isa should be rightfully proud of the part she has played in that journey. She has been a fantastic role model for all women and girls."