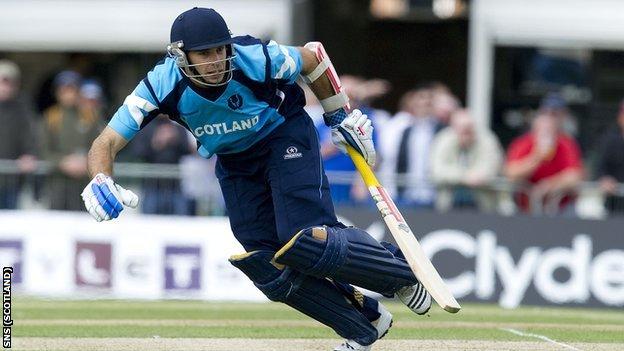 The hosts bettered their target of 206 with one ball to spare and leapfrogged Scotland into second in the table.

Scotland will hope to get their World Cup hopes back on track in their next ICC World Cricket League fixtures against Canada, in Aberdeen, in July.

Having elected to bat, Scotland's innings began poorly with Calum McLeod bowled out for two by Shadeep Silva.

Gordon Goudie's three sixes and three fours got the tourists back on track as Coetzer continued to produce runs but the former was also bowled by Silva, for 45.

Fraser Watts and Preston Mommsen added tallies of 32 and 22 not out respectively but Scotland struggled after Coetzer was bowled on 174 for five.

Gordon Drummond caught Amjad Ali off Richie Berrington but the hosts had reached 53 by then.

Shaiman Anwar hit four off the penultimate ball to finish on 77 and get UAE over the line and secure the victory.

The top two teams in the eight-team league automatically qualify for the 2015 World Cup but the rest will have another opportunity to seal two remaining places in a broader competition in 2014.