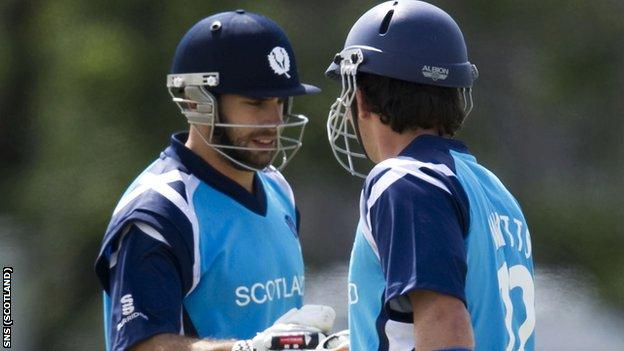 Jean Symes will be Scotland's overseas professional for the 2012 Clydesdale Bank 40 campaign.

The 25-year-old South African replaces George Worker, who was lined up for the position before his selection for the New Zealand Emerging Player programme.

Symes will turn out for Eastern Premier League outfit, Watsonian CC when not on Saltire duties.

He has amassed 5,000 first class runs in his homeland and taken 100 wickets with Highveld Lions and Gauteng.

Symes represented South Africa at the U19 World Cup in 2006, where he turned in a man-of-the-match performance against Scotland.

He has also had a previous stint in the UK, playing for Norden CC in the Lancashire leagues, where he had two impressive seasons, scoring almost 2,500 runs.

"As a top order batter and left arm spinner, he was exactly the type of cricketer we were looking for.

"I'm sure he will be a useful addition to both the Saltires and Watsonian CC for the 2012 season."

Meanwhile, Scotland will be without Josh Davey for their World Twenty20 qualifying campaign, which starts against Kenya on Tuesday.

The Middlesex all-rounder has returned to his county team for further treatment on a recurring knee injury and has been replaced by Simon Smith.

Fraser Watts will miss the match against Kenya after accepting a charge for two breaches of the ICC Code of Conduct during his side's four-wicket defeat to United Arab Emirates on Friday.

Watts was involved in an ugly spat with UAE captain Khurram Khan.