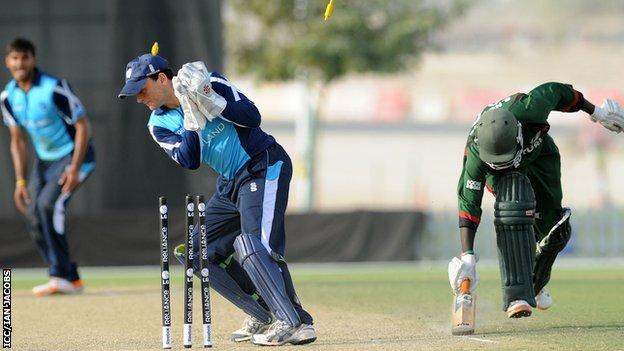 Scotland have beaten Kenya by 14 runs in their opening World Twenty20 qualifier match in Dubai.

Kenyan skipper Collins Obuya replied with an impressive 50 but the Scots made short work of the Africans' lower order batsmen.

Gordon Drummond was the pick of the Scottish bowlers, taking three wickets for 20 from his four overs.

MacLeod scored 55 off 35 balls as Scotland hit 178 for the loss of seven wickets at the ICC Global Cricket Academy.

Coetzer scored 46 from 36 deliveries and there were also valuable contributions from Richie Berrington (28) and an unbeaten 22 from Preston Mommsen.

James Ngoche was the leading Kenya bowler with two for 31.

Collins Obuya led the way in Kenya's reply but when he fell for 50, made from 36 balls, the momentum was lost.

Alex Obanda scored 35 and Rakep Patel also made 21 before he was run out by Berrington.

When Ngoche and his brother Shem were run out off the last two balls, both by Berrington, Kenya were all out for 164.

The tournament is staged across the United Arab Emirates from 13-24 March, with two of the 16 nations progressing to the finals in Sri Lanka later this year.

The Cricket Scotland website will be streaming matches live throughout the competition.