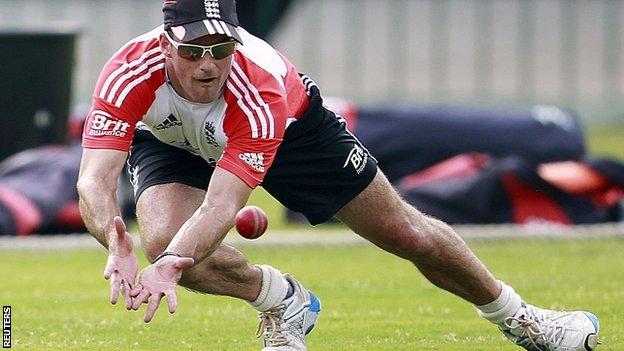 England captain Andrew Strauss says fringe players like Ravi Bopara must perform in the warm-up games to make the Test side in Sri Lanka.

Bopara is competing with Samit Patel and Tim Bresnan to take Eoin Morgan's place in the team for the two Tests.

But Strauss said: "The challenge for Ravi and others is to put their name in the hat and say 'pick me'.

"You always want to see how people are adapting to conditions and what sort of form people are in."

England were thrashed 3-0 by Pakistan in the United Arab Emirates in January and February in their first series since rising to the top of the Test rankings.

The road to recovery begins on Thursday with the first of two three-day warm-up games against a Sri Lankan Board XI in Colombo.

The Test series starts in Galle on 26 March with Bopara the favourite to replace Morgan if England choose to stick with the same balance of six batsmen and four bowlers.

But playing Patel would offer a third spinning option, while Bresnan would boost the seam attack.

"No one is guaranteed to play in that Test match," added Strauss. "Ravi has had to wait very patiently. He was in the UAE and didn't get a game and he's shown some good form in the one-dayers and he has a good chance of playing.

"There are a couple of others vying for that slot and it will obviously depend on the balance of the side we pick."

Strauss's side could surrender the number one spot to South Africa if they fail to beat Sri Lanka but the skipper insists his team are not as preoccupied by the rankings as they were in the past.

"We want to win every series we play and if we do that we stay number one," he said.

"But actually our fixation on the number one status has dissipated.

"We are eager to be number one but focussing on something big like that takes your attention away from what you need to do on a short term basis."