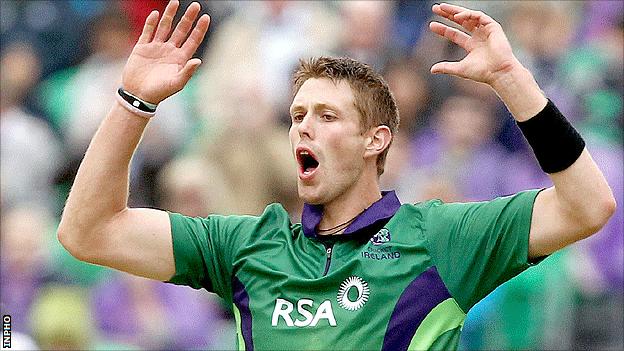 Ireland scraped past Italy with only two balls to spare to make it two wins from three in the ICC World Twenty20 qualifiers in Dubai.

Despite restricting Italy to just 100 for seven, the tournament favourites were made to work for victory, reaching 104-8 in a tense finale.

With seven needed from the last over, Gary Wilson hit two fours to win it.

The narrow victory follows an opening defeat by Namibia and Wednesday's convincing win over Kenya.

The latest batting performance must be of concern to the Irish camp.

Boyd Rankin was the pick of the Irish bowlers, his 3-16 including his 100th wicket for Ireland.

Italy scored just one run in the first 15 balls, with opener Andy Northcote falling to Paul Stirling for a duck.

Warwickshire bowler Rankin then took the first of his wickets before Italy's key pairing of Michael Di Venuto and Gareth Berg put on 39 for the third wicket.

George Dockrell had Australia-born Di Venuto lbw for 23 and Stirling returned to dismiss Berg for 19.

Ireland kept the runs down for the remainder to set up what was expected to be a straightforward run chase.

But both Kevin O'Brien and Ed Joyce failed to hit double figures, while Stirling (17), Will Porterfield (19) and Alex Cusack (15) got in and then out.

A nervy finish was in store but Surrey's Wilson hit a run-a-ball 30 not out to just about get them over the line.