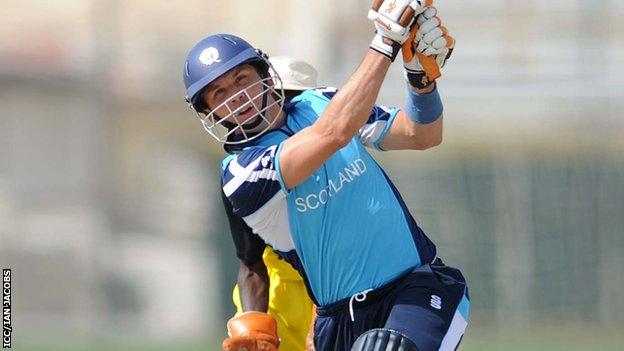 Scotland's hopes of qualifying for the ICC World Twenty20 have been boosted after they beat Uganda by 34 runs.

The Scots made up for Wednesday's defeat by unbeaten Namibia with a win at Dubai's ICC Global Cricket Academy in their Group B fixture.

They set their African opponents a target of 170 to win, but Uganda only managed 136-9 in reply.

Scotland go on to face bottom of the table Oman in their next Group B fixture, on Friday.

The Scots won the toss and elected to bat, pressing hard with a run rate of 8.50, with man of the match Calum MacLeod top-scoring with 45.

And their bowlers took charge of the Ugandan innings after their openers got off to a solid start - Arthur Kyobe managing 22 before being bowled by Gordon Goudie.

A late rally of 23 from tail-ender Deusdedit Muhumuza could not stave off the inevitable though, as the Scots claimed both points.

The qualifying tournament is staged across the United Arab Emirates from 13-24 March.

The winners in the United Arab Emirates go into Group A of the World Twenty20 finals in Sri Lanka alongside Australia and West Indies, while the runners-up go into Group B alongside England and India.

The tournament begins on 18 September, with the final to be played on 7 October.

The Cricket Scotland website will be streaming selected matches live from UAE throughout the competition.