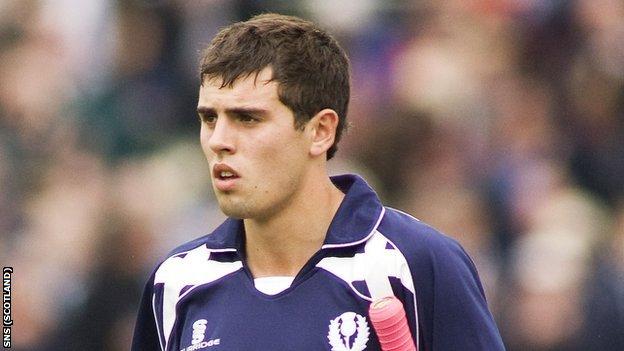 Calum MacLeod inspired Scotland to a comfortable win over Oman with an unbeaten century at the ICC World Twenty20 qualifiers in Sharjah.

His 104 runs helped Scotland set a target of 158, one that bottom team Oman fell 52 short of matching.

The win adds to triumphs over Kenya and Uganda, the only reverse being Wednesday's game against Namibia.

Scotland, who are now second in the eight-team group behind Namibia, next play on Sunday, against Ireland.

MacLeod finished 104 not out from 76 balls as he powered Scotland to 158 for five before a tight bowling performance sealed a heavy win.

Scotland chose to bat first and promptly put on a 104-run opening stand as Richie Berrington (30 off 28 balls) provided able assistance to the in-form MacLeod.

Aside from the opening pair only Preston Mommsen, with 13, got out of double figures but MacLeod's tally of six fours and four sixes made up for that.

Safyaan Sharif then removed both openers early to undermine the Oman reply.

Their chase never really got off the ground as Matthew Parker and Mommsen shared four wickets and Madjid Haq returned match-best figures of three for 12.

Oman lost their last man with 14 balls left in the match.

The winners of the qualifying tournament, staged across the United Arab Emirates from 13-24 March, go into Group A of the World Twenty20 finals in Sri Lanka in September alongside Australia and West Indies.

The runners-up go into Group B alongside England and India.

The tournament begins on 18 September, with the final to be played on 7 October.

The Cricket Scotland website will be streaming selected matches live from UAE throughout the competition.