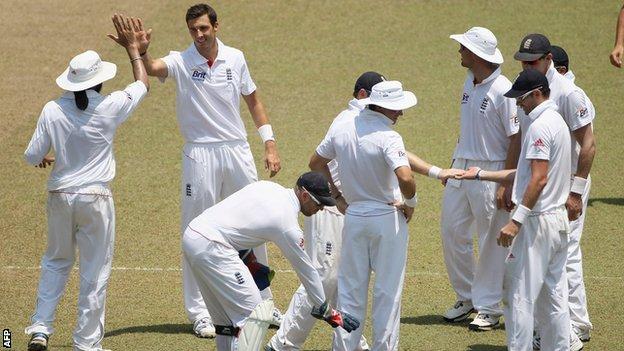 England's bowlers were on top form as they tore through a Sri Lankan Board XI to seal victory by an innings and 15 runs in a heated first warm-up match.

England, who declared overnight on 303-8 (Alastair Cook 163no), were in complete control in Colombo as they skittled out the Sri Lankans for 119.

The tourists were angered when Andrew Strauss 'caught' Dilruwan Perera, who stood his ground and remained not out.

It's just frustrating because Straussy is an honest guy [and] if it's out he'll say it's out. If it wasn't he'll say it didn't carry

England skipper Strauss was aggrieved after claiming he had taken Perera's edge cleanly off Anderson's bowling, and England players surrounded the umpire to remonstrate, but the batsman was allowed to stay.

Seconds later the atmosphere intensified further when a confident run-out appeal against Malinga Bandara was rejected.

"It's just frustrating because Straussy is an honest guy [and] if it's out he'll say it's out. If it wasn't he'll say it didn't carry," he said.

"We are still getting to terms with the heat. Maybe we could have handled it better than we did.

"It's called a warm-up game but we like to play with the intensity of a Test match and I think that's the way we are going to get the best practice out of these games, which is what we need before the first Test."

England's overnight declaration had paid immediate dividends when Anderson, who claimed the first four wickets of the first innings, struck with his third ball to have Ashen Silva removed.

Only Dimuth Karunaratne (31) and number nine Bandara (28 not out) offered any real second-innings resistance.

Finn grabbed his first wicket when Bhanuka Rajapaksa flashed hard in the eighth over to Swann at second slip.

Swann skittled top scorer Karunaratne and Finn had new batsman Prasanna Jayawardene caught at second slip without score with the sixth ball of his second spell.

Cook took a diving catch at short leg off Swann's bowling to dismiss Sachithra Serasinghe just before lunch for five, then Anderson got Roshen Silva to edge the ball to Strauss at first slip for 12.

Swann's off-spin accounted for Kanishka Alvitigala for a duck, and Perera finally fell victim to a Matthew Prior catch off Finn before Panesar made the only addition to his first-innings five-for, trapping Tyron Gamage lbw for 19.