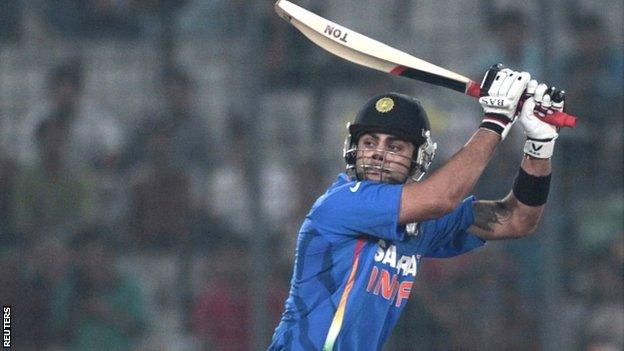 India produced their highest one-day international run chase as they beat Pakistan in the Asia Cup in Dhaka.

Pakistan openers Mohammad Hafeez and Nasir Jamshed hit tons and shared 224 within 40 overs in their team's 329-6.

With Pakistan already through to the final, India require the already eliminated Sri Lanka to beat Bangladesh on Tuesday if they are to join them.

After beating India by five wickets on Friday in the match that will always be remembered for Sachin Tendulkar's 100th international century, Bangladesh will progress if they beat Sri Lanka as head-to-head results are taken into account before net run rate.

India's record reply hardly began in the best of circumstances under the floodlights, as Gautam Gambhir fell lbw to the second ball of the innings.

This was India's 48th ODI victory over Pakistan, who hold the edge in their 121 meetings with 69 wins

Tendulkar lofted Aizaz Cheema for six with a late cut and shared 133 with Kohli, but having completed his 96th ODI half century he was deceived by a Saeed Ajmal doosra in the 20th over and caught at slip.

However, Kohli inspired his team towards their target with some high-calibre, wristy strokes on both sides of the wicket.

The 23-year-old reached his 11th ODI hundred and, after taking 12 in three balls off Umar Gul, he dispatched Wahab Riaz for three consecutive fours in the next over.

He finally departed in the 48th over with only 12 needed, getting a top edge that swirled to point, having equalled the highest score by an Indian batsman in a run chase.

But five balls later the match was over, Suresh Raina flicking Gul over square leg for six and skipper Mahendra Dhoni thumping the paceman through the covers for the winning boundary.