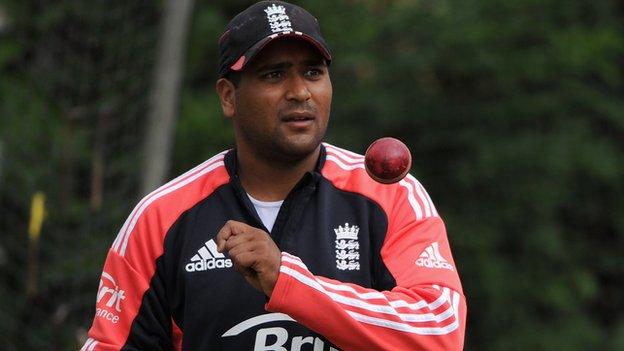 While Andrew Strauss and his men were humiliating Australia in their own back yard in January 2011, a player whose England career had become a laughing stock was watching from close quarters, involved in a personal battle to win a place in the team.

Samit Patel, fresh from the embarrassment of being dropped from England's World Cup squad for being overweight, was holed up in a Brisbane gym battling his infamous bulge with more vigour than ever before under the tutelage of Thai kickboxing champion Shannon "Shaggy" King.

"Samit was watching the Poms smashing the Aussies in the Ashes all the time he was training and was massively motivated by it," recalls King, who runs the Corporate Box gym which stages professional boxing and Thai boxing bouts.

"He didn't want to profit from anyone's misfortune. He just wanted to prove to [England coach] Andy Flower that he could get into the best team."

Fourteen months later, Patel, 27, is within touching distance of breaking into the England team, battling it out with Ravi Bopara for a place in the first Test against Sri Lanka starting on Monday. But his road to redemption has had more ups and downs than an alpine stage of the Tour de France.

A talented batsman and left-arm spinner for Nottinghamshire who represented his country at under-15, under-17 and under-19 level, his ability to hold down a place in the England one-day side has always been hampered by fitness concerns.

A portly presence in a team of chiselled athletes, his first public dressing down came in March 2009 when he was dropped for the Twenty20 and one-day legs of England's West Indies tour for failing to meet fitness standards and derided as "fat, unfit and lazy" by team-mate Kevin Pietersen.

The following year, Flower was desperate to include Patel in his World Cup squad and decided to send him to King's Brisbane gym on the recommendation of England security expert Reg Dickason.

"Reg had heard about us here in Brisbane and knew that we had helped get a few wayward kids back on the right path, so they thought we'd be good for Samit," says King.

"But it soon became clear that, although Samit is as talented as they come, the problem was in his head."

With Patel more out of shape than ever following a honeymoon in the Caribbean, four weeks did not prove enough to get him ready for England duty and he was unceremoniously discarded by Flower, who berated the player's inability to "get in reasonable shape".

The humiliation of another public rejection clearly stirred something in Patel, who was soon on the phone to King asking for another spell in Brisbane.

"I said to him if you want to come back we will sort you out but you have to have an attitude change," says King.

"I told him I was a world champion in a sport that doesn't really pay any money but I've got pride in myself and it's something I want to achieve.

"I think Samit has always found the fitness side of the game less interesting than the skills side of the game and that was highlighted once he came onto England's radar. I think the public humiliation of being dropped from the World Cup squad shook him up because he then went back to Australia after Christmas of his own will. There's still room for improvement but I don't think Samit wants to just drift around in county cricket for 10 years and then say at the end of his career I could have played for England more."

"We had to convince him he was knocking on the door in a sport that does have money and a lot of people would give their left arm to be in his position."

King soon realised that, like a weary office worker bored of his daily routine, Patel's enthusiasm for cricket training had been sapped by endless hours spent in the nets, catching practice and fielding drills.

Instead, King put Patel through a rigorous programme of boxing, rowing, cycling and running.

On one occasion, they were dropped off 15km (9.3 miles) from the gym in the middle of the day and ran all the way back in 35 degree heat.

"Samit whinged pretty much the whole way round but then a lady who was running with us started catching us up," says King.

"I started getting in his ear saying 'mate if she beats us we'll never hear the end of this'. And for the last 3km he absolutely motored back.

"That was when I realised he is a natural athlete."

King's regime, which also involved Patel batting with weights strapped to his chest, arms and legs, and trips to supermarkets to educate his student about making the right food choices, paid off as he shed eight kilos (17.6 lbs) in four weeks.

A place on England's one-day tour of India followed, with Patel emerging as a rare positive from the 5-0 defeat after scoring 160 runs at an average of 40 and bowling some tight spells.

He continued that form in the one-day and Twenty20 series against Pakistan in February, impressing Flower enough to earn a place in the Test squad for the Sri Lanka tour.

On his arrival in Colombo, Patel admitted fitness issues would probably dog him throughout his career, while Flower said that although Patel was "inching in the right direction" he still had "significant work to do" on the fitness front.

One thing is for certain though, without his Brisbane boot camp, Patel would be watching another England Test series on TV.