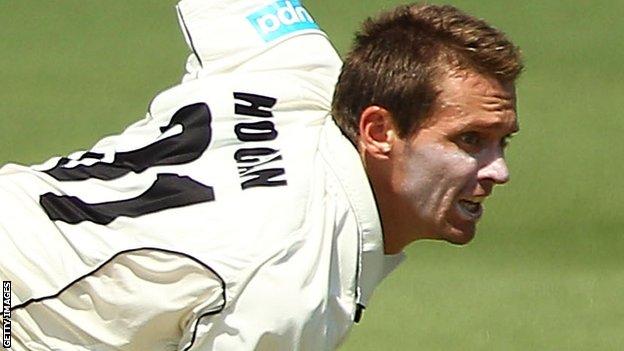 The 30-year-old will join the Welsh county in July and will join Marcus North for the second half of the season.

Hogan was a latecomer to first-class cricket and made his Western Australia debut in 2009.

"I think he'll be a great asset to our attack," said Glamorgan coach Matthew Mott.

"He's probably not a household name in Wales yet but he comes highly recommended particular from his [Western Australia] captain Marcus North.

"He's highly rated in Australian cricket. Just recently he was polled amongst the Australian players as one of the best bowlers in the country.

The Glamorgan head coach added fellow countryman Hogan would be primarily used by the county in the Championship rather than in the one-day competitions.

"He's predominantly going to be a four day bowler and you can never have too many fast bowlers," said Mott.

"We've spoken at length about our need to rotate our bowlers and take the pressure of the likes of James Harris in our attack and give them some rest time.

"He's coming for the second half of the year so the bowlers will certainly get enough opportunities to bowl plenty of overs before he comes."

Although Hogan is an Australian, he also holds a British passport so will not be classed as an overseas player.

"I am thrilled to be joining Glamorgan," said Hogan.

"I have always been keen to play cricket in the UK and am pleased to have joined such an ambitious and passionate county.

"The Club is working hard to achieve success on the playing field and I am delighted to be able to be part of their future plans".

Glamorgan will be without Hogan and fellow Australian North for the opening weeks of the season.

North will miss the first five weeks of Glamorgan's season as his wife is expecting their second child.

Glamorgan have signed Australian all-rounder Moises Henriques for the early part of the season to deputise for compatriot North.