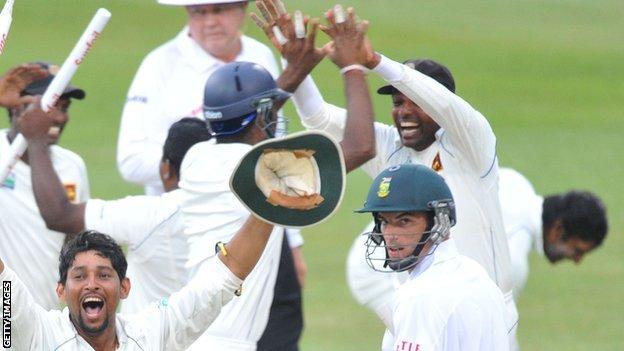 Sri Lanka have gone through a turbulent period since finishing as runners-up in the 2011 World Cup with key players retiring, a new captain to bed in, allegations of wrongdoing and even players going unpaid.

But even before that, their game had been in decline. Despite their whitewash against Pakistan, England will start as favourites in the two-Test series because Sri Lanka's recent form is appalling

Since July 2010 they have won only one of 15 Tests - a historic victory in South Africa - as the retirements of heavyweights Muttiah Muralitharan, Chaminda Vaas and Sanath Jayasuriya have taken their toll.

Together with Arjuna Ranatunga and Aravinda de Silva, the trio were influential in transforming the game in this cricket-mad nation.

The series against England will be an ideal opportunity for a new generation of opening bowlers, most probably Suranga Lakmal and Dhammika Prasad, to make their mark

Obviously it was the bowling department that heavily felt the absence of the country's two most successful bowling partners.

During recent tours in Australia and Bangladesh, the younger bowlers have performed remarkably well but Sri Lanka, it seems, are still a long way from finding a permanent replacement for Murali-Vaas combination.

In the eyes of many analysts, the situation has been made worse by selection blunders. Chamara Kapugedera is regularly picked despite repeated failures while the promising Angelo Mathews played in the Asia Cup despite injury and is now a doubt for the series against England.

The accusation made is that selection is more a case of picking favourites than trying to unearth new talent.

The series against England will be an ideal opportunity for a new generation of opening bowlers, most probably Suranga Lakmal and Dhammika Prasad, to make their mark against the world's top-ranked Test team.

Sri Lanka will also field three of four spinners including Rangana Herath, Suraj Randiv and Sekkuge Prasanna who starred in a recent series against England A.

Although Sri Lanka have been experiencing a downward trend - similar albeit a lot more dramatic than the plight of Australia after the retirement of the Waugh brothers, Warne, Gilchrist and McGrath - not everybody is pessimistic about the available talent.

"I think there is enough talent in the team and in my opinion there is no big issue if everybody performs to their best," new chief selector Asantha de Mel told BBC Sinhala.

That however goes against the fact that the team is yet to secure a single series since Kumar Sangakkara resigned from the captaincy at the end of the World Cup co-hosted by India, Sri Lanka and Bangladesh.

As Siddarth Ravindran correctly observed in Cricinfo, it was current skipper Mahela Jayawardene, his predecessor Tilakaratne Dilshan and Sangakkara who have mainly carried the burden in the batting department in recent years while the promising Dinesh Chandimal and Lahiru Thirimanne have added young blood and talent to the team.

But it is not clear whether either Chandimal or Thirimanne will be selected against England as Tharanga Paranavithana is set to open the batting with Dilshan and Prasanna Jayawardene will most certainly be handed the wicketkeeping gloves.

It is not only on-the-field performances that matter in this island nation, however, as cricket has always been a political issue since the country won the World Cup in 1996 under Ranatunga's captaincy.

Cricket is arguably also one of the extremely rare areas in which all nationalities - Sinhala, Tamil, Muslim, Burgher - unite.

Sri Lanka Cricket (SLC) has gone through a period of serious financial trouble since co-hosting the 2011 World Cup. This resulted in national players going unpaid since March, last year.

The salary issue has finally been resolved but SLC head Upali Dharmadasa predicts it will take five years to resolve the financial crisis it faces after constructing two brand new venues and renovating another to host the World Cup.

The crisis is so serious that SLC has handed the maintenance of three major international stadiums to the country's military.

Allegations of corruption, denied by the authorities, and a perceived lack of financial transparency have also affected the game and so a home series against England comes at the right time as the money earned will be extremely important for the SLC in their attempt to resolve the financial mess.

At least the dressing room seems to be a more harmonious place following the re-appointment of Jayawardene as skipper. The failure of Dilshan in the role was mainly due to disharmony among the most senior players, according to the authorities.

"When Sri Lanka was facing a downturn trend during the last few months, I always maintained that it was due to the internal politics within the team," said Sports Minister Mahindananda Aluthgamage.

As expected, both Dilshan and Jayawardene denied the accusation. Interestingly, however, one of the major factors of the row between the senior players was that the influence Sanath Jayasuriya had on Dilshan, according to analysts.

Jayasuriya, currently a ruling party MP with close links to the ruling family, has not commented on these accusations.

Either way, the two-Test series against Andrew Strauss's team will be Jayawardene's first serious test since assuming the reins in January.

The fans who were delighted to see him make his mark in the recently-concluded Commonwealth Bank series might not delay too long in criticising him if he fails to transfer that success into the longer version of the game.