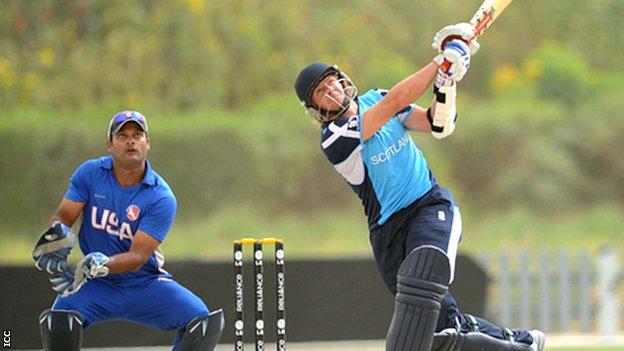 Scotland have qualified for the play-off phase of the ICC World Twenty20 tournament despite losing their final Group B game to the United States.

The US snatched a dramatic seven-wicket victory after passing the total of 161 with just one ball to spare.

The Scots' record of four wins and three defeats was matched by Kenya but a superior run rate puts them through behind Namibia and Ireland in Group B.

Scotland will meet the Netherlands in a knock out match on Thursday.

Scotland captain for the day Kyle Coetzer won the toss and decided to bat, with his side putting on 161 for eight from their 20 overs.

Wicketkeeper Jan Stander (58) top-scored for the Scots but right-arm seamer Usman Shuja (three for 39) did most of the damage and restricted them to the achievable target.

US openers Steven Taylor (40) and Aditya Mishra (62) laid firm foundations in the run chase, with captain Mishra the last man out as his side survived a nervous last over to reach 162 for three.

Canada will take on Ireland in the second-versus-third other play-off game, with unbeaten group winners Namibia and Afghanistan meeting each other for the right to go straight into the final on Saturday 24 March.

Cricket Scotland are streaming selected matches from the United Arab Emirates on their website.