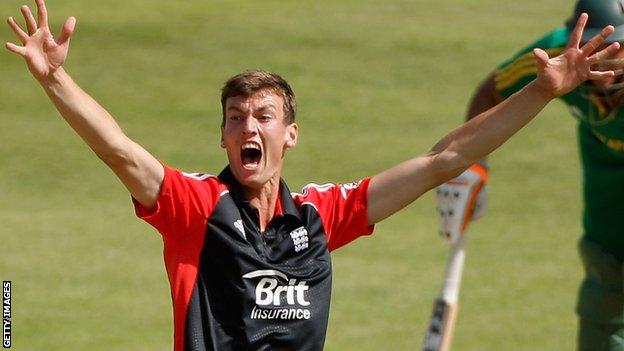 Essex pace bowler Reece Topley believes he has the right attributes to be an England player of the future.

The 18-year-old left-armer will be part of the England under-19 squad taking part in a four-nation one-day tournament in Australia next month.

"I'm on the ladder towards the England side, but I am fully aware I'm on the bottom rung of that ladder.

"It's just time and effort and hard work and whether I want it enough - and I think I do," he told BBC Essex.

"It's a long journey to get to where I want to be but with the effort and determination that I think I have - I've been working really hard over this winter and I have really come on as a cricketer - so I don't think I couldn't play at the top level."

Topley, who stands 6ft 7ins tall, first made headlines as a 15-year-old when floored by a Kevin Pietersen shot during a practice session.

But he has taken 34 wickets in nine first-class appearances at a cost of just 23 runs each and is hoping to use the forthcoming trip down under, where England's youngsters will also take on New Zealand and India, to secure a return to Australia for the Under-19 World Cup in August.

On his return, Topley will be staking a claim for a place in Essex's first team, having picked up 14 wickets in his opening three County Championship matches last season.

"I always felt that I could always contribute at this level because I've been playing second-team cricket since I was 14, 15 and I didn't look out of place there," he said.

"[Making] the step-up, you've just got to be more disciplined - but I was surprised I was leading wicket-taker after the first three matches."

So determined is Topley to succeed that he left school to pursue his goal of being a full-time professional cricketer.

And he is eager to establish himself in Essex's limited overs side this summer, as well as the Championship line-up.

"One-day cricket is an area where I really feel I could develop because with the attraction of the IPL you've got guys around the county circuit who are really pushing themselves in that form of the game, so I think one-day cricket's just getting tougher and tougher because of the money surrounding it," he added.