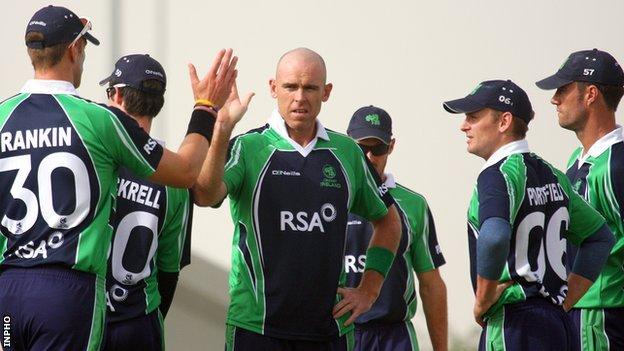 Ireland kept alive their hopes of qualifying for the World Twenty20 with a 10-wicket victory over Canada.

A superb bowling performance, in which George Dockrell and Max Sorensen both took three wickets, restricted Canada to 106-8.

Paul Stirling hit 61 not out from 32 balls and William Porterfield an unbeaten 42, as Ireland completed the run-chase with 10.3 overs to spare.

Despite the impressive batting performance of the openers, Johnston was named man of the match for his efforts with the ball.

Teenage spinner Dockrell finished with three for 19 and medium-pacer Sorensen three for 20.

Ireland must win two more games to secure their qualification for the World Twenty20.

They face the Netherlands in their next match on Friday, with the winners meeting Namibia on Saturday.

The winners of that preliminary final will join Afghanistan, who beat Namibia on Thursday in the clash between the two group winners, at the World Twenty20 in Sri Lanka in September.