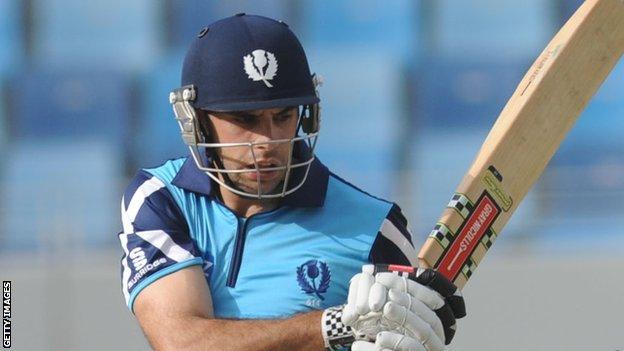 Scotland failed to qualify for the World Twenty20 as they suffered a three-wicket defeat in a play-off against the Netherlands.

Opener Calum MacLeod struck 57 from 42 balls to help Scotland to a healthy 166-6 from their 20 overs.

But the Dutch batsmen held their nerve, Tom Cooper top-scoring on 60 to seal Netherlands' victory.

Kyle Coetzer's side had looked on course to set the Dutch an even bigger target, having been 113-1 after 12.2 overs, but they failed to produce the necessary late hitting.

The result was in the balance during Netherlands' run chase. And, when Gordon Drummond claimed two wickets in the 18th over, including top-scorer Cooper, the Scots looked in a good position.

But the momentum shifted again when Coetzer's second delivery of the penultimate over was thrashed for six by Tim Gruijters, allowing Netherlands the breathing space to ease to their target.

The Netherlands will now play Ireland, who enjoyed a 10-wicket win over Canada, in an elimination semi-final.

The Irish must win that game to set up a showdown with either Afghanistan or Namibia to reach the final and book a place at the World Twenty20 in Sri Lanka.