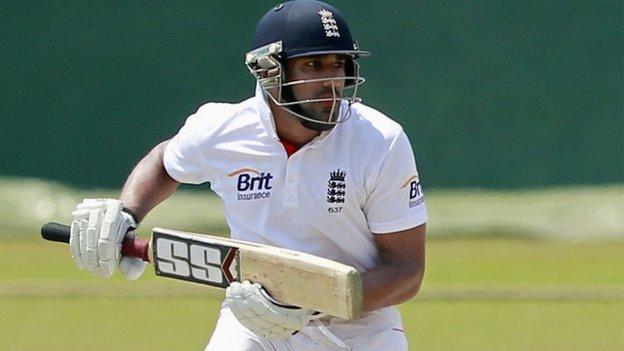 England chased 359 to beat the Sri Lankan Development XI by four wickets in their final warm-up game ahead of the two-Test series against Sri Lanka.

The home side declared their second innings on 199-4 at lunch to give England a run-chase of 359 in 64 overs.

However, Bopara has a side strain and is "unlikely to bowl in the Tests".

While Bopara was batting, the England and Wales Cricket Board issued a statement revealing that he had injured himself during the game but that he is "available for selection as a specialist batsman".

Prior believes England are "fully prepared" for the opening Test which begins in Galle next Monday (26 March).

"Going into this Test series now having won our first two warm-up games gives the team a lot of confidence," said Prior.

"And, after a run chase like today we're fully prepared for the series," said the wicketkeeper, who made amends for his three-ball duck last time out with a fluent knock that included 13 boundaries and one maximum.

"We thought they'd got too many but we started very well and it makes it easier making it as realistic to a Test match as possible.

The game had looked set to peter out into a draw with the Sri Lankan XI resuming their second innings on the final morning on 44-1 but a sporting declaration gave England a chance of victory.

And Pietersen set about the almost six-an-over run-chase in typically aggressive fashion with a couple of boundaries in the opening over.

However, fellow opener Ian Bell, who had scored just 14 runs in his previous two innings on the tour, lasted just 14 deliveries before he was caught down the leg side for 11.

Pietersen stroked seven boundaries in his 52-ball knock but departed before tea, bowled by Tharanga Lokuarachchi, having taken the score beyond 100 with Ravi Bopara.

Following the break, Bopara kept England in touch with an 83-run partnership with Prior.

After he departed at 248-4, Tim Bresnan chipped in with 14 runs as England continued to prioritise their Test preparations by sending in the lower-order batsmen instead of using Andrew Strauss and Jonathan Trott.

Stuart Broad added 55 for the sixth wicket with Samit Patel, the spinner scoring the lion's share of the runs and hitting a couple of sixes in his run-a-ball knock of 72.

England still had work to do when Graeme Swann came to the crease but he completed the chase in emphatic style, hitting the final three balls for a six and two fours as he finished with 31 off 12 deliveries.