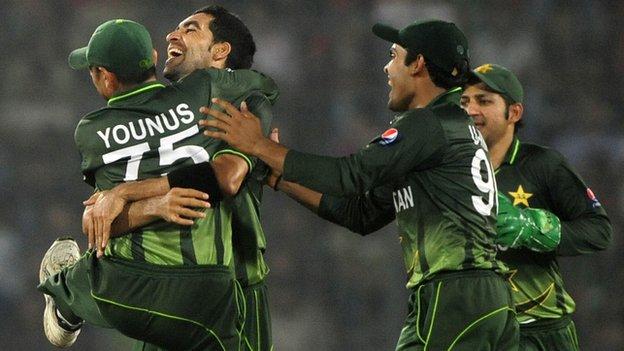 Pakistan held their nerve to win a thrilling Asia Cup final against Bangladesh by two runs, denying the hosts a first major trophy.

"Their narrow loss in the final would have broken the hearts of thousands of Bangladeshi fans. But the Tigers, as they are known locally, showed their potential at last, knocking out India and Sri Lanka on their way to the final. The message from Bangladeshi fans in the last few weeks came across loud and clear - we are not minnows of international cricket anymore. We have arrived and others should treat us with respect."

But Abdur Razzak fell to the penultimate ball of the game and Shahadat Hossain failed to score the boundary needed off the final delivery.

Hossain could only manage a leg bye and his contribution with the bat followed a painful final over with the ball as wicketkeeper Sarfraz Ahmed plundered 19 runs to force the Pakistan total upwards.

While Iqbal and Al Hasan collected their runs at a decent rate in Bangladesh's reply, their momentum was checked by some laboured batting at the other end.

Bangladesh required nine runs off the final over and then four off the last two balls, but Aizaz Cheema crucially bowled Razzak to leave Hossain with too much to do.