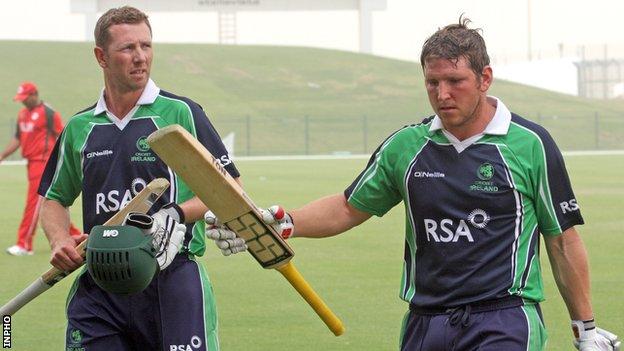 Ireland won the qualifying event in Dubai at the weekend and will play in the World T20 tournament in Sri Lanka in September.

"It keeps us knocking on the ICC's door to say we want more cricket against the top nations," said all-rounder White.

"If we keep putting in performances like we have done in the last couple of weeks we'll not be far away."

White claimed that Ireland cricket's newest star Paul Stirling has ''the world at his feet'' following his superb performances in Dubai.

The 21-year-old hit two half-centuries in a day as Ireland beat first Namibia, and then Afghanistan on Saturday. His 17-ball half-century against the Afghans that was the second fastest T20 fifty in international cricket history.

''His innings on Saturday night to help us win this trophy was simply world class,'' said White.

''There is no doubt that the world is at his feet in terms of cricket.''

Stirling is now being tipped for a lucrative Indian Premier League contract next year, and has been linked with a possible switch to England.

However the player has vowed to turn down any approach from England before the World T20 in September.

"There is no chance," insisted Stirling.

"This (qualification) is absolutely massive. From a player's perspective, we want to play in major tournaments - it is pretty much the goal of our lives."