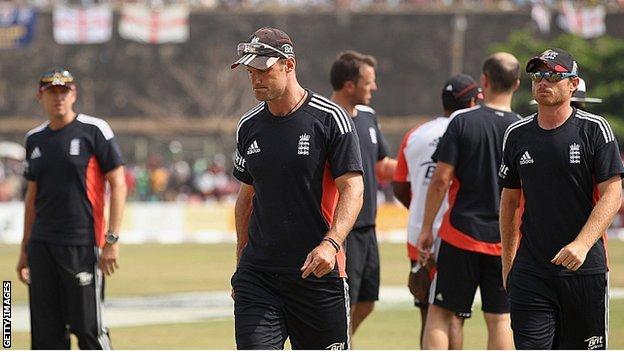 Michael Vaughan believes England need to freshen up their top order after a 75-run defeat by Sri Lanka extended their losing run to four Tests.

The ex-captain says changes are needed to give England a chance against India in their four-Test series in November.

"I don't think England can arrive in India with this top five," he said.

"Something needs freshening up, whether it is now or at the end of the summer. England can't afford to go in with players carrying baggage against spin."

England's loss to Sri Lanka followed a 3-0 whitewash by Pakistan in the United Arab Emirates and featured another substandard batting performance.

Andrew Strauss's side have only scored more than 200 three times in eight innings over the winter and have only passed 300 once.

A TALE OF TWO AVERAGES

Speaking on BBC Test Match Special in the aftermath of the defeat, Vaughan compared the situation England face now to that of 2005, before he captained the team to their first Ashes victory over Australia in 18 years.

"This set of players will score runs in England this summer, but against spin they've got a lot of bad memories and baggage," he added.

"We used to have players who carried a lot of baggage against Australia, Shane Warne and Glenn McGrath in particular, and that is why we had to change it for 2005.

"The likes of [Kevin] Pietersen and [Ian] Bell came in for the first time and we did well.

"I'm never one for change but they have to freshen it up. It might only be one, Jonathan Trott came in in 2009 and they realised he could play."

Vaughan's comments were echoed by his fellow ex-skipper and TMS pundit Geoff Boycott, who called on coach Andy Flower and batting coach Graham Gooch to do more to discourage the batsmen from taking risks after several players lost their wickets playing attacking shots.

"Even with average bowlers we'll have a problem," said Boycott. "I'd like to ask Graham Gooch and Andy Flower some questions, because this can't keep going on.

"Why are they trying to sweep off the stumps? It's fraught with danger. Just stay, occupy the crease. We can't win Tests with people giving away their wickets like that."

The only England player to escape criticism was Jonathan Trott, who batted for almost six hours in making 112 before he was the seventh man out as England crumbled from 233-4 to 262 all out.

"Trott played beautifully," said Boycott. "It's very difficult for one man to do it chasing 340. He did need a little help from the other end."