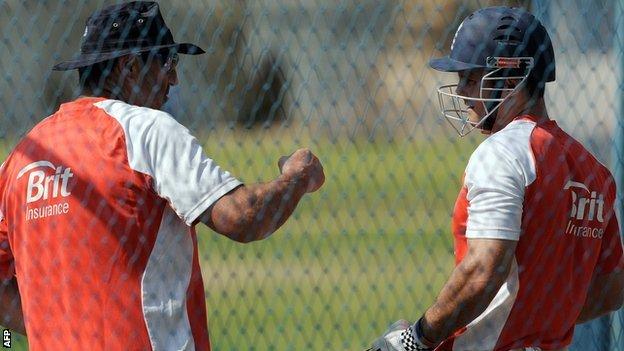 England batting coach Graham Gooch does not believe that Andrew Strauss will resign as England captain.

The 75-run Test defeat to Sri Lanka in Galle was the fourth in a row for England this year, after the 3-0 reverse to Pakistan in the UAE.

Strauss has only scored one century in 48 Test innings, but former captain Gooch feels the 35-year-old will carry on despite his recent indifferent form.

"I don't see a guy who's thinking of retirement," he told the BBC.

"I see a guy who's determined and disciplined in making himself a better opening batsman."

"It is a lonely place when you are captaining a losing side, and you are not scoring any runs yourself. I have no question that there are many more runs in his locker. I do not think that is the end of him. It is just a question of whether he will carry on as captain."

Strauss's century against Australia in the first Ashes Test in Brisbane in November 2010 is his only ton in almost three years, but Gooch pointed out that the Middlesex man's place had been under pressure before, only for him to respond with a big innings.

Strauss was dropped for the tour of Sri Lanka in 2007, but made a crucial 177 in the second innings of the third Test against New Zealand in Napier in March 2008 to cement his place in the team.

"He's working hard at his game, and he is shaping his game to be better and more comfortable against the turning ball," Gooch told BBC Test Match Special.

"I see lots of improvements - he scored a 100 in the preliminary match last week and he played really well."

Strauss said after the defeat in Galle that he had no intention of resigning in the middle of a series, and Gooch thinks the England skipper is still ambitious and focused on improving the team.

"I know from my chats with him last summer, he wants to make a big contribution towards England in the last phase of his career and I see him working every day to make improvements," he said.

England go into the second Test needing a win to retain their place as the best Test team in the world rankings. They may be without the services of Stuart Broad, who is undergoing a scan on Friday morning on the ankle and calf injuries he sustained in the Galle defeat.

If Broad is not fit, Tim Bresnan or Steve Finn are the most likely replacements for the second Test, which starts on 3 April.