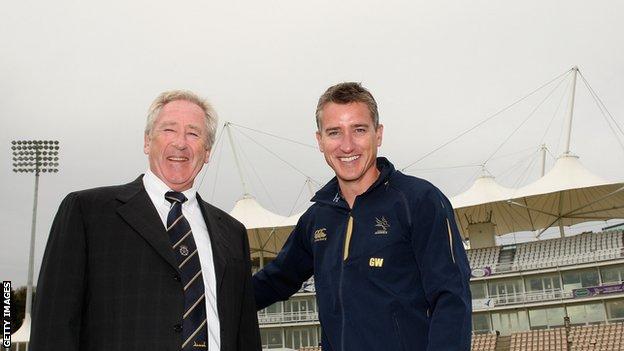 Hampshire manager Giles White says he intends to utilise cricket's loan system to help ease the pressure on one of the smallest squads in England.

Division Two Hampshire have a squad of just 17 for the 2012 season - one of the smallest in county cricket.

"It is an area we can look at if we find ourselves in difficulty," White told BBC Radio Solent.

Hampshire have been hit hard financially by missing out on hosting an Ashes Test during the last series in the UK, as well as the general economic climate.

"Obviously Rod [Bransgrove - Hampshire chairman] and I speak regularly about squads and budgets and we work through it together," added White.

"The financial constraints are something that has hit all counties and we are no different so we cut our cloth accordingly.

"We've got a slightly different set up this year and in many ways it is more exciting. We've got a good developing, young side that can stay together for the next five years.

"There is good quality there, also there is a loan system out there that counties are using more regularly."

Bransgrove revealed that a deal for the proposed £32m hotel development at the Ageas Bowl is close to being signed off with Hampshire's chairman determined to turn around the fortunes of the county on and off the pitch.

Last season Hampshire were also relegated to Division Two for the first time since 2004.

"We've not been profitable up until now," Bransgrove told BBC Radio Solent.

"We are in the planning stage for building the hotel. To move forward to the next stage meant quite a significant reinvestment in the business and to do that I've had to set some new guidelines.

"So, from here on in, this business has to be profitable in affect from 2012.

"That has meant the cost of our playing staff is less and some of our other overheads will be less. But if it means we can move forward confidently into a secure future with the hotel constructed then it is going to be worth it. "