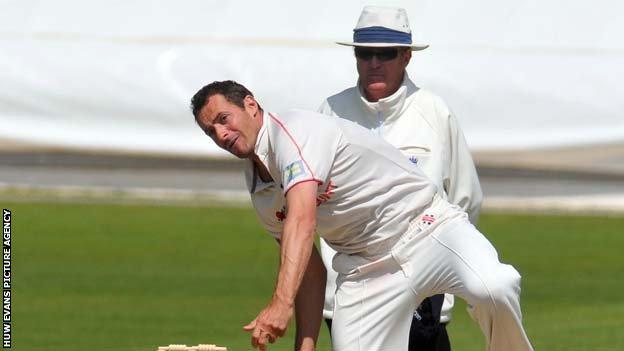 Dean Cosker heads into Glamorgan's opening LV County Championship match at Leicestershire on Thursday on the brink of 500 first-class wickets.

The slow left-armer took 4-22 against Oxford MCCU on Monday to move onto 499 victims.

Those wickets have come since the 34-year-old made his Glamorgan debut back in 1996.

"Hopefully my first ball of my first spell at Leicester I'll be celebrating my 500th wicket first-class," he said.

"It's quite a big milestone. [I felt] pretty happy in pre-season and feeling in good rhythm.

"Given the amount of first-class cricket games [I've played] I'm pretty happy with my return.

"It's been quite an important last two or three years where I have actually taken over the main spinners' role, which hopefully I've grasped with two hands.

"Crofty [Robert Croft] bowling the other end as helped me taken an enormous amount of wickets.

"So I'm pretty happy with 499 at the moment and hopefully I can finish with a whole lot more by the end of my career."

Cosker, who was part of Glamorgan's 1997 County Championship-winning side, remembers vividly his first wicket 16 years ago.

"Steve Watkin caught Graham Lloyd in cow corner [on debut against Lancashire in 1996]. It was a pretty decent ball but he slog swept it," he said.

Glamorgan have not won any silverware since 2004 when Cosker was part of the side that lifted the one-day league trophy.

But the former England A bowler is confident about the new season.

"[Coach Matthew] Mott has got together a group of players that want to fight for each other," he added.

"We are fittest that we have ever been. We have had some great results pre-season and there is generally there is a good vibe.

"It's now crunch time and we need to produce results in all forms of the game. We would be disappointed if we didn't succeed in one of them this year."

With James Harris out with a groin injury and Will Owen also sidelined, Graham Wagg and Huw Waters are set to share the new ball with the county likely to play both spinners - Cosker and veteran Croft, who is starting his 24th season with the club.

Australian Moises Henriques is set to make his Championship debut at Grace Road.

The squad shows just one change from the one that beat Oxford MCCU on Monday with Will Bragg replacing Nick James.