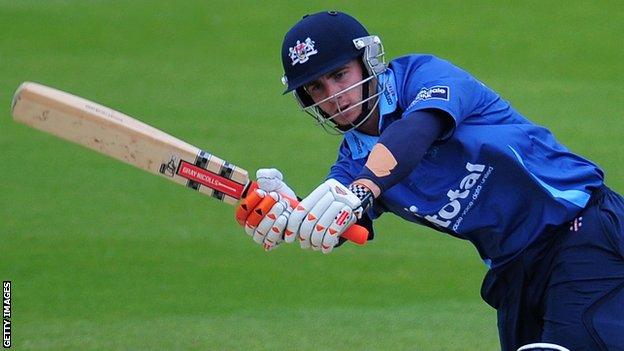 Gloucestershire have re-signed Kane Williamson as their overseas player for the first half of the season.

The 21-year-old New Zealand international, who has played 12 Tests for his country, hit 831 runs for Gloucestershire in 23 County Championship innings last season.

He will miss the first three Championship games but should be available for selection from 26 April.

Meanwhile Paul Muchall has signed a two-year deal after a succesful trial.

The 25-year-old impressed during Gloucestershire's warm-up games and could feature against Essex on Thursday.

Williamson, who has also taken 43 first-class wickets, will join the Kiwis' tour of the West Indies following his stint at Nevil Road, but should be available for the entire FL t20 campaign.

He will be replaced by one of his countrymen for the second half of the campaign, under an agreement with the New Zealand Cricket Board.

Gloucestershire's director of cricket John Bracewell told the club website: "Kane is taking an enforced holiday because of the amount of cricket he has been playing for New Zealand, but we will have him for the T20 as well as some four-day games and he proved a very good fit in our dressing room last season.

"Since then he has developed in all three formats of the game for the New Zealand side and that reflects great credit on him, as well as showing the benefit of his time with us."