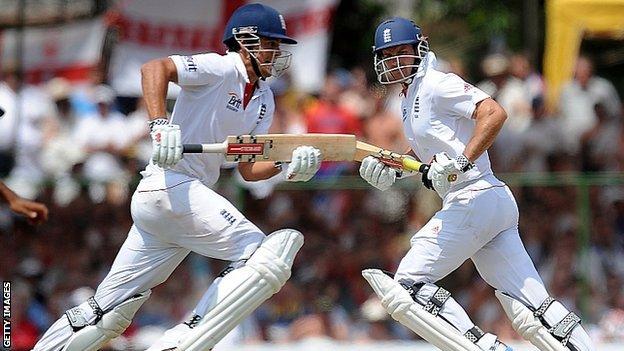 Andrew Strauss and Alastair Cook shared a 122-run opening stand as England cemented their advantage over Sri Lanka in the second Test in Colombo.

Strauss eased the pressure on himself with 61 while Cook finished on 77 not out as England reached 154-1.

Captain Strauss passed 50 for only the second time this winter before being caught cutting at Tillakaratne Dilshan.

Earlier, Graeme Swann (4-75) took three wickets in the morning session as Sri Lanka were dismissed for 275.

"A near-perfect day for England. We have been waiting for a day like this. They got their nuts down, used their brains and batted with patience and application. Trott and Cook are used to playing long innings and they have all day tomorrow."

England, whose world number one status will be lost unless they win this match, have had a poor winter with the bat on the way to losing four Tests in a row.

But this much-improved display put them in a strong position to secure a substantial first-innings lead - although the job is only half done. Cook will resume tomorrow alongside Jonathan Trott, who is 15 not out.

The tourists took a very different mindset to this innings, batting patiently and responsibly, in contrast to the first Test in Galle.

Under-pressure Strauss looked determined not to repeat his recent mistakes and was noticeably restrained.

He offered two chances from edges that fell short of first slip though. The first was off Rangana Herath on 23 and the second came from Dilshan's bowling, just two deliveries before he was dismissed.

Cook was similarly conservative - his first unorthodox shot a reverse sweep that brought up the openers' century stand - after he had faced 158 balls.

The 27-year-old left-hander was dropped at forward short-leg by Lahiru Thirimanne, off Herath, on 20, but that was a tough chance.

Andrew Strauss and Alastair Cook's efforts have moved them up to third in the table of highest-ever runs scored by an opening pair.

Although Cook was visibly pleased to end his own poor run, the burden was mostly on Strauss to perform after only making more than 32 once in eight innings all winter, and his relief at a significant contribution was palpable.

England would also have been grateful to Swann for the way he bowled in the morning to wrap up the Sri Lanka tail. The home team, resuming on 238-6, had frustrated the tourists for 50 minutes but the introduction of the off-spinner ended their resistance.

Swann invited the batsmen to play their shots and they took the bait as Suraj Randiv (12) and Angelo Mathews (57) were both caught playing aggressively.

Herath was similarly impatient, nicking while trying an ugly swipe at Tim Bresnan, then Swann took his fourth wicket by bowling Suranga Lakmal for a duck.

That gave England's batsmen the chance to battle for more than 60 overs in the remainder of the day, which they did determinedly.