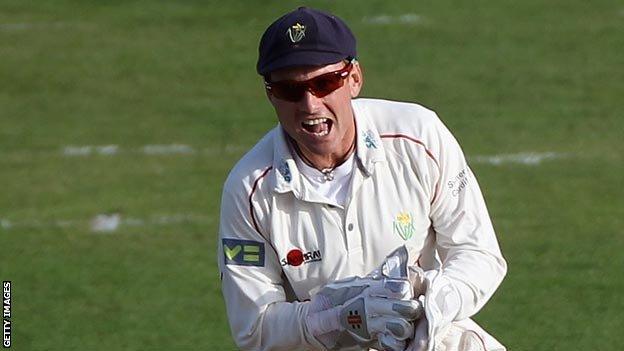 The county wicket-keeper wants that to start in their opening Championship clash at Leicestershire on Thursday.

Glamorgan are keen to shake off the tag of also-rans after eight years without a major trophy.

"Our aim at Glamorgan is to try and get back that winning culture that has been missing over the last few years," said Wallace.

"And that's starts by focusing on the first game at Leicester.

"The plan is to go up there and put in a good performance and come away with a win.

"It [Leicester] is a tough place to go especially early on. We came unstuck up there the first game last season. We went up there and lost.

"[But] I think Leicestershire is a good place to start. I always think it's easier to start away from home as well. There is a little bit less expectation.

"We have got four [Championship] games before the end of April which is a lot of games. If you get some good form in you can get off to a flier in the season.

"That's the way we have looked at it and that's one of the reasons why we have done so much in pre-season as well so we can hit the ground running."

As well as increasing fitness levels during a busy pre-season Wallace, who takes over as skipper this season from out-going captain Alviro Petersen, believes the squad are mentally stronger going into the 2012 campaign.

"We have got quite a focussed group of players at the moment. I would like to see more players playing for England - with the Lions and with the full side," he said.

"And I think we have genuinely got players here capable of achieving that sort of ambition.

"We are optimistic for some good times. Quite a few players have made considerable improvements.

"Welsh sport is in a really good place at the moment with the rugby, the football and the boxing. It would be good if we can carry that on."

As well as improving home-grown talent Wallace is more than happy with his overseas players for 2012.

Australian all rounder Moises Henriques is on board for the first five weeks before he is replaced by his seasoned countryman Marcus North, who has signed a two-year deal.

"He gives us a lot of options in the side and I think he gives us an ability to win games himself with both the bat and the ball.

"And then we have got Marcus [North] to take over. So the situation with the overseas player we are very happy with."

The main injury worry in the camp is the fitness of James Harris, who missed the winter after having a double hernia operation and is still sidelined with a mystery groin injury.

The England Lions seamer misses the trip to Leicester and could be unavailable for most of April.

"James Harris is a fantastic bowler. He is an international standard bowler. To have him in our side is a huge boost," insisted Wallace.

"I know he is frustrated he has missed out on the winter programme but we are quite hopeful he will play a part in the near future.

"We are hopeful he will play a lot of cricket for us but we will have to wise about resting him as well."