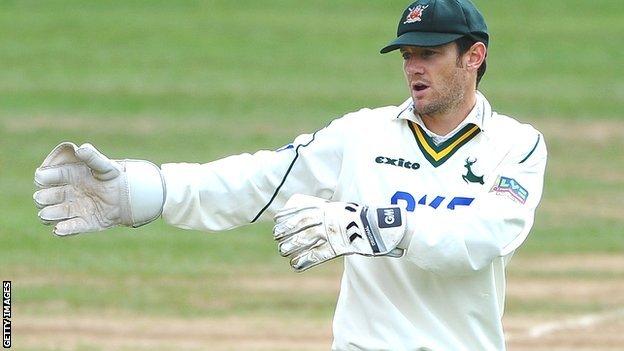 Captain Chris Read is confident that Nottinghamshire have a squad capable of challenging on all fronts this season despite the possibility of losing almost half their team to England this summer.

Spinner Graeme Swann and England t20 skipper Stuart Broad are certain to be involved in all forms of the game.

Patel has forced his way into the Test side on the tour to Sri Lanka, summer signing Taylor is on the fringes of the Test side and Hales has already been part of the one-day set-up.

"That's why we have the squad we have. We know everyone is capable of playing first-team cricket and might well be called upon," Read told BBC Radio Nottingham.

"We know where we stand with Stuart Broad and Graeme Swann. We know we will not see a great deal of them, if anything, but we plan to be without them.

"It is much more of an unknown quantity with guys like Alex Hales, Samit Patel and James Taylor for that matter, who has captained the Lions for the last 18 months."

Read, whose side begin the County Championship season at home against Worcester on Thursday, is however delighted with director of cricket Mick Newell's close-season signings.

Michael Lumb has been recruited from Hampshire with the aim of solving the well-documented batting problems Notts have had in recent seasons.

"Having lost Mark Wagh and Ali Brown last year, we needed to boost our batting and I think we have done so with two very fine signings who will slot nicely into the top six," Read, 33, added.

I believe Notts can turn around their poor form at the top of the order this year and expect major contributions from Neil Edwards and Riki Wessels, as well as the internationals, Hales, Lumb, Patel, Taylor and Chris Read.

"Harry Gurney is a lesser-known quantity but from the evidence I have seen, he looks a very exciting prospect."

Read is eager to see his side improve on their four-day efforts last season. Despite winning their opening three matches, they could only finish sixth in Division One.

"Last season was very mediocre one in the Championship," Read said.

"We play a lot of cricket in April and May and there is a lot of scope to make some early running this season.

"But I think the Championship is as strong as it has ever been.

"Surrey look a fantastic squad on paper. Middlesex have some very talented players and they might see a decent amount of their internationals so they will be a force to be reckoned with.

"There was some really good competitive cricket played last year and it's anyone's game."

Read is however mindful of the need to bring one-day success to Trent Bridge.

Last season saw Notts shine in the group stages of both the CB40 and FL t20 competitions, but they failed to reach either final.

Read said it is about time they enjoyed the glory and excitement of success in the shorter forms of the game.

"One day-trophies have eluded us for a long time now and I want to win a one-day trophy," Read added.

"We have come close in Twenty20 cricket with a couple of Finals Days in recent years.

"If you look at our squad, we have the make-up to compete in all competitions. It would be nice to get to a Finals day in Twenty20 cricket, get to a Lord's final and then get over the line."

Meanwhile, left-armer Gurney is relishing the chance to impress for his new county and prove he has the ability to fill the gap left by Ryan Sidebottom in 2010, and show his quality in the four-day game.

"I guess I do fill that void after Ryan left," Gurney said. "They are pretty big boots to fill. If I can come in and have half the career that he had then I am sure Mick will be very pleased.

"That's my role to run in and try bowl as quick as I can. I offer a slightly different angle being a left armer as well and I will be trying to do that on a consistent basis for Notts now.

Notts could be title contenders - or they could be fighting for survival. This promises to be the tightest and most competitive Division One campaign of all time.

"It's no secret what I have achieved in my career so fare has predominantly been with the white ball.

"Now it's time for me to step with the red ball and prove that I am a quality red-ball bowler and force my way into that side.

"There are a lot of very good bowlers here. The competition is tough but that only bodes well for Nottinghamshire because the bowlers that are selected will be the best of the bunch at that point in time.

"But we are also have the strength in depth if there is an injury or guys need a rest."

BBC Radio Nottingham will have commentary on every Nottinghamshire County Championship and Twenty20 match this season.

The season opener against Worcestershire gets under way on Thursday at 1100 BST and can be heard via this link.