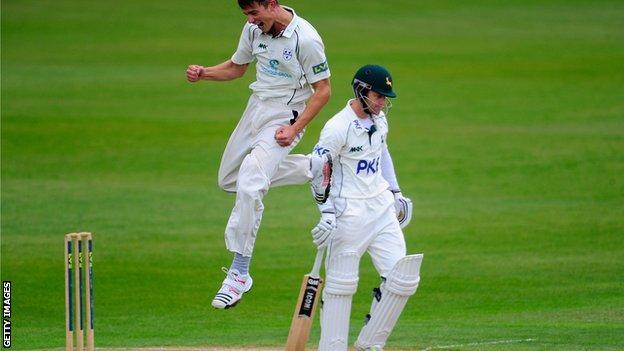 Worcestershire ended day one of the new County Championship season with a slender lead over Nottinghamshire after 20 wickets fell at Trent Bridge.

James Taylor and Michael Lumb both failed on their debuts as Richard Jones took 6-32 to skittle the hosts for 118.

Only an unbeaten 51 from Paul Franks saved Notts from complete disaster before they fought back with the ball.

Luke Fletcher and Ben Phillips both took three wickets as the visitors were all out for 130 to end the day.

It leaves the game already well advanced but intriguingly poised, although poor batting, rather than the state of the pitch, was largely to blame.

Worcestershire struck with the fourth ball of the day as Alex Hales nicked Alan Richardson to slip before Lumb was undone by a David Lucas away swinger.

Jones then removed Taylor and Riki Wessels in the space of three balls, and added Chris Read to his list of victims before Franks and Neil Edwards added 40 for the sixth wicket.

But Jones returned to add three more wickets for three runs to dismiss the hosts before seeing his own batsmen fare little better.

Phillips led the Notts fightback with 3-29, including Worcestershire captain Daryl Mitchell lbw, while Fletcher dismissed Australian overseas player Michael Klinger on his way to finishing with 3-45.

There were also two wickets apiece for Andre Adams and Franks as Worcestershire ended the day with a 12-run lead.

VIEW FROM THE COMMENTARY BOX.

"What a strange first day of the season - a snow storm at the end would have just about rounded it off.

"Yes, it was always going to be a bowler-friendly day but 20 wickets going down makes it sound like a "terror track" and it isn't, as Paul Franks proved.

"The ball moved off the seam and swung, and it was a bit two-paced, but there were some poor shots played by Notts in particular, and Richard Jones made them pay as he continued to enjoy the renaissance he started at the end of last season.

"Looks like we'll all be home for the Easter Egg chase on Sunday."