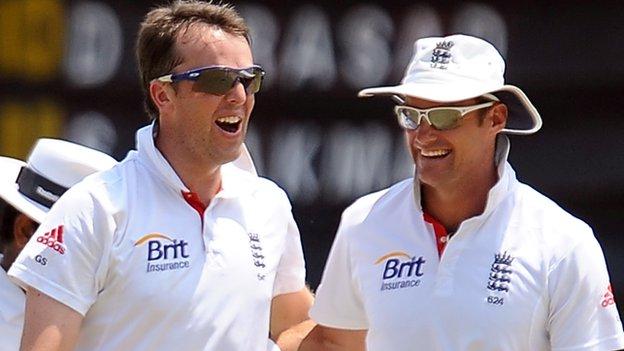 Off-spinner Graeme Swann has called on England to bat Sri Lanka out of the second Test in Colombo.

Alastair Cook's unbeaten 77 and 61 from Andrew Strauss helped the tourists end day two on 154-1 in reply to the hosts' 275 all out.

"It's the perfect platform for us to build a big first-innings lead," Swann, who claimed 4-75, told BBC Sport.

"We need to use the whole of day three and maybe a bit of day four to build a lead that we can then defend."

After Swann took three of the four wickets required at the start of the second day, Strauss and Cook played patiently on the way to a 122-run opening stand.

The Nottinghamshire spinner wants to see the same cautious approach from England when they resume on day three.

"It would be dangerous for us to go out and up the tempo," he said.

"It is attritional cricket that is going to win this game. We need to build a substantial lead.

"It's going to be hard work to shift their exceptional middle-order so we need runs on the board. If I got my way, we would get 500 or 550."

Swann thinks that England's cautious tactics made their eventual run tally all the more satisfying.

Graeme Swann has become the third highest wicket-taker, on 176 Test wickets, among England spinners behind Derek Underwood (297) and Jim Laker (193).

"As it was very attritional, it doubles the effort required to get to 154-1," he explained.

"To be on that score at the end of the day was just what the doctor ordered.

"Strauss and Cook were excellent at the top of the order and Jonathan Trott looked solid. I think Strauss has had unfair criticism. He's a world-class opening batsman and captain."

Sri Lanka coach Graham Ford admitted his bowlers would have to improve to get back in the game.

"The way England's batsmen played in the first innings at Galle and the way they played here was totally different," he said.

"They certainly looked like they had a good think about playing our spinners, although I was expecting the pitch to do more.

"It gives us something to think about. I expect my guys to be up for a scrap on day three."