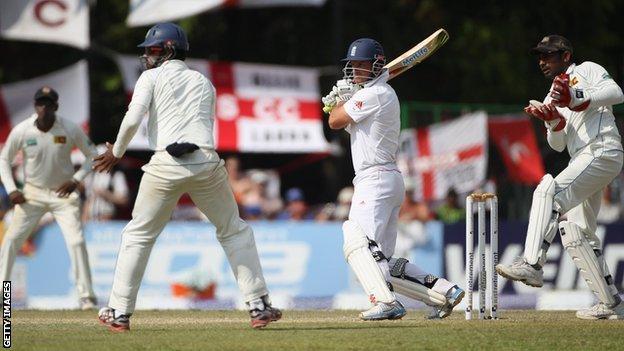 England enjoyed comfortably the best day of their winter so far, on day two of the second Test in Sri Lanka, and it's not rocket science to see why.

The real challenge for them was their batting and the first century stand between Andrew Strauss and Alastair Cook in the five Tests they have played in the UAE and Sri Lanka tells its own story. They played very well on the way to achieving that.

There was a lot of pressure on Strauss. It is never easy in these circumstances with everyone looking to see how he did and wanting him to do well.

But there would have been mixed emotions for him even though he scored 61. Although he played well, getting out in the fashion that he did - edging while trying to cut Tillakaratne Dilshan - would have infuriated him.

Andrew Strauss scored between 19 and 32 in five of the eight winter innings he had played before this one. This was only the second time he has passed 50 this winter.

He will know that, with so much time left in the game, he could have nailed down a really big score. It is a shame that he did not go on to do that.

If England go on to win - which they should - then some pressure will be off his shoulders.

But I still think he will be frustrated and kicking himself about missing out on the chance to capitalise in this innings.

Other than that, it was a good day for England. But that is what you would expect of them, which is why this winter has been so disappointing.

Hopefully their display on this day will be an indicator as to how they will perform when they play next in the sub-continent against India.

The approach that Strauss and Cook took - batting cautiously and patiently - was absolutely how England should have batted this winter from Dubai onwards.

You cannot try to force the pace in these conditions, getting a start and then trying to smash the ball about.

They cut out the sweeps, thank goodness. They kept playing with a straight bat. That is how platforms are built and it is a shame that it has taken them so long to do that this winter.

The job is not done here however. There is still a lot of batting left to do and - although I have no worries about Jonathan Trott - Kevin Pietersen and Ian Bell still have some points to make.

The good start does not mean that England are home and dry with such a long way to go. They have to look at batting all the way through day three.

England have to get the first-innings lead and, if they get 100, 120 and 140 ahead then it will put the pressure on Sri Lanka. Then, when the home team bat, Graeme Swann will have a role to play.

Listen to analysis of the day's play on the TMS podcast.