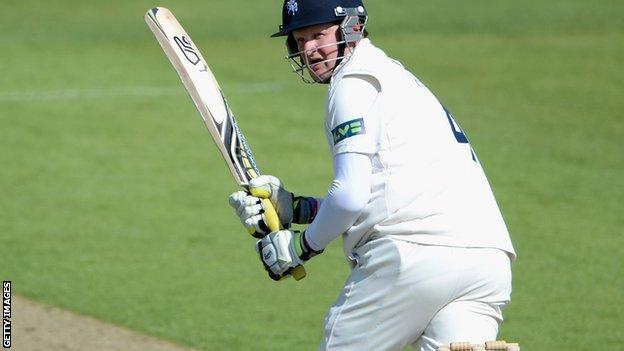 Twenty-four hours after the ground was covered in snow, openers Scott Newman and Rob Key led the way for the visitors with a stand of 141.

Newman was bowled by Ryan Sidebottom and Key was three short of a century when he was run out by Andrew Gale.

VIEW FROM THE COMMENTARY BOX.

"In 2011, Kent's ability to score heavily in their first innings was conspicuous by its absence. Today, the platform set by Kent's new guard was practically perfect.

"Key's 97 was impeccable from ball one, blocking bullishly and attacking with control. His patience in knuckling down when Newman went showed immense maturity and the anguish as he trudged off, having denied himself a deserved century,was plain to see. Passing 16,000 career first class runs appeared scant consolation.

"For Yorkshire, if they can bottle up the aggression shown by Ajmal Shazad and Sidebottom at times and unleash it tomorrow, they still have a chance. They need some change from a lacklustre, unimaginative showing today."