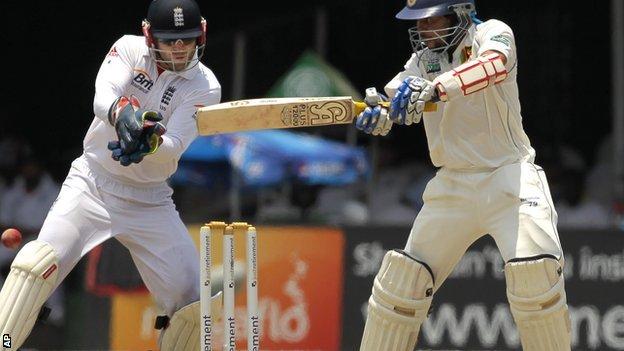 Matt Prior said that England had got their "just desserts" after Graeme Swann struck twice in his final over against Sri Lanka.

Swann's late burst reduced Sri Lanka to 218-6, giving them a lead of just 33 in a Test England must win to retain their number one ranking.

And Prior said: "I thought the energy was brilliant and we got our reward at the end.

"Today's been a tough day and the whole bowling unit did fantastically well."

Before Swann removed Thilan Samaraweera for 47 and Suraj Randiv for a duck two balls later, the chances of England forcing a victory on the final day to level the series had been receding with the hosts appearing relatively untroubled.

"Before Swann's two late wickets, England had looked flat. I don't say that in a negative way, because everyone is exhausted after four days in this heat.

Swann had got frustrated too. He was not in the best of moods - he is the team's frontline spinner and he knows the pressure is on for wickets - but he managed to get the new ball to spin and bounce and he is now one victim away from another five-wicket haul."

However, Prior told BBC Sport that England are now in a position they would have readily accepted at the start of the match.

"Our bowlers did a fantastic job today in sticking to their guns," he said.

"We're in a great position to win a Test match. When we lost the toss, if you'd have said we'd have them [effectively] 33-6 we would have taken that."

While Sri Lanka will reflect on a damaging end to the day they might also cast their mind back to the dismissal of Tillakaratne Dilshan as a turning point.

The usually free-flowing batsman had played circumspectly for 35 before being given out after being caught by James Anderson at slip off the bowling of Swann.

The decision was immediately reviewed by Sri Lanka but numerous replays were unable to ascertain whether the ball had definitely missed the edge meaning the decision stayed with the on-field umpire's call - much to Dilshan's obvious dismay.

However, backing the decision, Prior said: "As far as I was concerned, Dilshan hit it - I would have referred it if it hadn't been given out.

"Are we 100% certain he didn't hit it? There's no Hot Spot at moment so that will bring in a bit of criticism but we thought he hit it.

"He was given out, end of story. The important thing with the review system is that you get the right decision - some will argue it was, some that it wasn't.

"All we know is that he walked back and we were very happy."