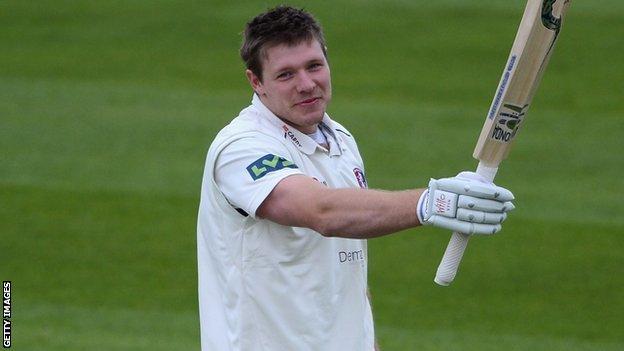 Matt Coles hit an unbeaten 103 as Kent took charge on day two of their County Championship match against Yorkshire.

Coles, who was dropped twice, hit a six to reach his maiden first-class century and shared a ninth-wicket partnership of 153 with Mark Davies (58).

Kent, who had begun the day on 345-5, declared on 537-9 after Coles reached his ton, with Ajmal Shahzad and Adil Rashid both taking three wickets each.

Yorkshire made 32-0 in reply before rain brought an early finish.

Kent's total of 537 was their highest-ever on a Yorkshire ground, beating the 486 at Scarborough in 2007, while the ninth-wicket partnership of 153 was also a new record for Kent against Yorkshire.

That figure exceeded the 107 total made between Neil Taylor and Min Patel at Maidstone in 1994.

"When Kent lost three quick wickets, it was reminiscent of their 2011 frailties but again Yorkshire struggled to maintain any pressure.

"Matt Coles rode his luck but the effortless nature of his maiden first-class century issued a stern warning to other sides thinking Kent would be walkovers this season.

"His bravado in raising three figures by reverse sweeping Rashid for six was outstanding. Davies provided an unexpected ally when Yorkshire failed to spot his weakness against pace.