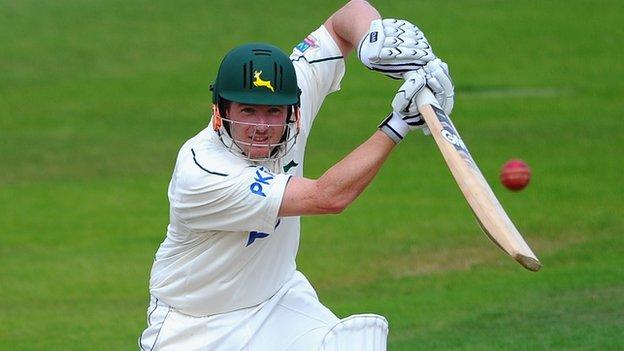 The hosts, who trailed by 12 runs after both sides struggled in their first innings on Thursday, dominated the second day's play at Trent Bridge.

Neil Edwards made 48, Alex Hales 46 and Michael Lumb 40, while Alan Richardson took three of the wickets that fell.

"Where a third day looked unlikely at one time, it could go to a fourth. Notts batted better, Worcestershire didn't bowl as well, and a couple of sharp early chances went down.

"Wessels' hundred was hard-earned on a pitch that still appears a bit two-paced, but Worcestershire simply didn't look the same attack as yesterday, the ever-reliable Richardson apart.

"Choudhry seemed destined not to get a bowl but did well when he got on and there was a spirited comeback with the new ball. Most would feel Notts have more than enough already, but who would have predicted seven wickets on the second day after 20 fell on the first?"