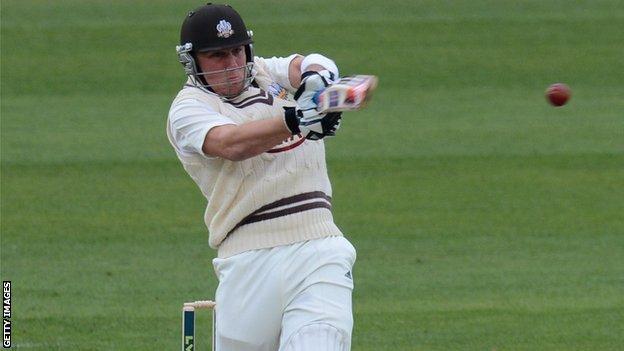 Surrey captain Rory Hamilton-Brown led by example as his score of 89 left his team in charge against Sussex.

Sussex began day two on 105-5 and reached 196, with Joe Gatting unbeaten on 72, as Jade Dernbach and Chris Jordan ended with three wickets apiece.

That left Surrey with a 68-run lead, which the hosts quickly extended as Hamilton-Brown's 89 off of 103 balls helped them to the close on 250-8.

James Anyon took four of the wickets for Sussex, who trail by 318 runs.

"After two breathless days at The Oval where 28 wickets have fallen on a good wicket, tomorrow promises to be just as exciting.

"Surrey are ahead on points largely due to a fifth wicket partnership of 136 between Rory Hamilton-Brown and Tom Maynard, and lead by 318 going into day three.

"Hamilton-Brown is an exciting cricketer, he's good for the sport, and his controlled onslaught on the Sussex bowling had the Bank Holiday crowd on the edge of their seats.

"But credit Sussex, they never gave up, their ground fielding in particular was first class and, in James Anyon (4-63), they had the best bowler in the match so far.

"On a good pitch Sussex will still fancy their chances, but they will need to quickly break the ninth wicket partnership of Meaker and Lewis to stand a realistic chance. Chasing anything over 350 will be a tall order."

"A brilliant counter attack from Rory Hamilton-Brown put Surrey in a strong position at the end of the second day.

"The Surrey captain scored a critical 89, his partnership with Tom Maynard in the afternoon session driving the home side into a dominant position after they had been reduced to 55-4. Jimmy Anyon was the pick of the Sussex bowlers.

"Surrey, with a 318-run advantage, already know they have an excellent chance of putting Sussex under real pressure on the third day but it could have been a very different situation without Hamilton-Brown's efforts."