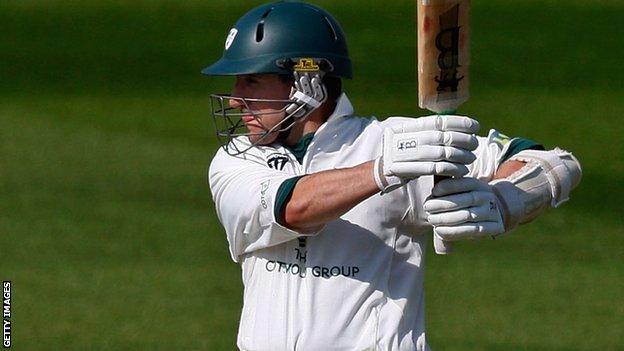 Daryl Mitchell hit a ton to leave Worcestershire's clash with Nottinghamshire in the balance.

Riki Wessels added nine more to his overnight 104 before falling to Alan Richardson, who claimed five wickets, as Notts were bowled out for 403.

However, Mitchell and Ben Scott were both dismissed in the penultimate over of the day as Notts ended strongly.

Worcestershire need another 134 runs and have four wickets remaining going into what will be a tense final day at Trent Bridge.

"A great effort from Daryl Mitchell and Moeen Ali, but Ali's departure before the new ball was taken was a big blow.

"Luke Fletcher should have been watching Forest over the road but made Worcestershire pay with two wickets in two balls, his celebration was as good as any goalscorer at the City Ground.

"Earlier the evergreen Richardson picked up another "five for", has there been a better signing for Worcestershire in the last five years?

"Not all over by any means and the first half-an-hour will be vital, but who on Thursday evening would have put money on Sunday cricket at Trent Bridge?"