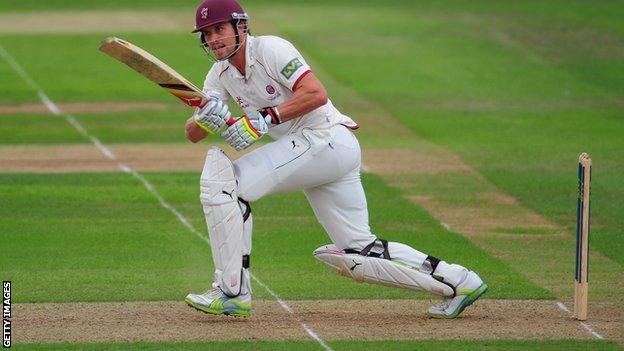 Nick Compton fell one run short of his century as Somerset piled the pressure on Middlesex in their clash at Taunton.

Somerset resumed on 202-3 and moved to 350 as Compton progressed from 58 to 99, before being caught by Chris Rogers off the bowling of Toby Roland-Jones.

Middlesex, who ended on 38-1 with Joe Denly the only man to be dismissed, go into the final day's play 66 runs behind with nine wickets remaining.

"Somerset can fancy their chances of victory after another strong day. Nick Compton showed all the patience and resilience required on an early season pitch until he was out searching for his hundred.

"His innings ensured an unassailable position for his side even though Middlesex wrapped up the final six Somerset wickets for only 95 runs. There was a marked improvement in the performance of their bowlers from the previous day.

"Vernon Philander was threatening once more with the ball and was close to adding to his tally before, much to Middlesex's relief, bad light and rain ended a day that still had 26 overs remaining to be bowled.

"The visitors will hope for further assistance from the weather on the final day when they'll bat to save the game."