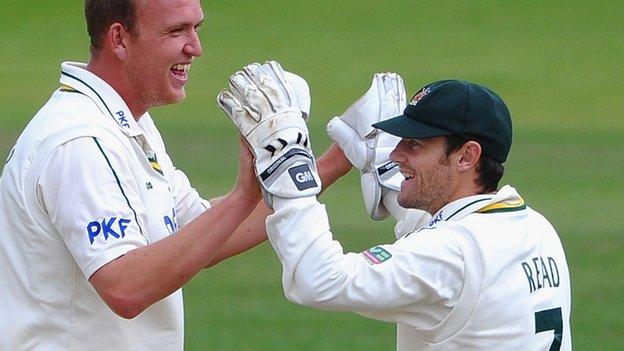 Andre Adams and Luke Fletcher finished with four second-innings wickets each as Nottinghamshire wrapped up a 92-run success against Worcestershire.

The hosts took just over an hour to claim the four wickets they needed, dismissing Worcestershire for 299 in their pursuit of 392.

Fletcher struck in the first over and claimed the final wicket of Alan Richardson to end on 4-53.

Adams weighed in with the other two wickets to post figures of 4-90.

"It's always nice to take wickets especially after the start we had - all out for 118 - but we managed to pull it around.

"Moeen Ali and Daryl Mitchell put the pressure back on us but as you always do at Trent Bridge if you work hard and put the ball in the right areas you get your rewards and we did last night."

"We didn't lose it on the fourth innings, and there were some positive signs, we bowled well first innings and myself and Mo [Moeen Ali] had a good partnership yesterday.

"We should have got more in the first innings with the bat and we should have bowled a lot better in their second innings.

"The first session on the second day was vitally important with the new ball, it did plenty but we didn't nail it as we did in the first innings.

"It was nice to get some runs but I would give them all back for a win for the team."

"A disciplined bowling performance from the Nottinghamshire attack rescued the side after the first innings batting debacle and for the fourth straight season the county begin with a victory in their opening match.

Dismissing Worcestershire cheaply first time around was significant and after a few choice words from Mick Newell the top order were more selective in their stroke-play second time around.

A target of 392 was always going to be a challenging one for Worcestershire who were still in contention until the second new ball, whereupon And Adams and Luke Fletcher stepped up to secure the win."