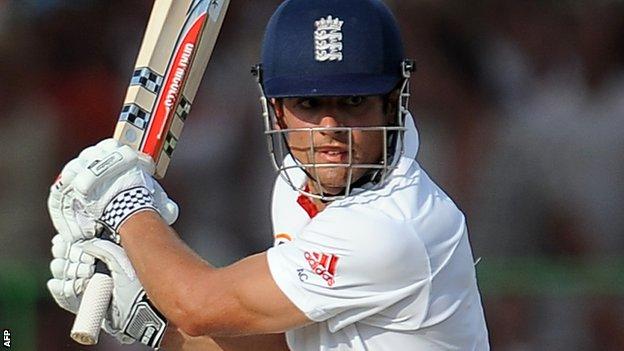 Alastair Cook believes England's dominant second Test victory against Sri Lanka proves their batsmen are back to their best.

The 460 in the first innings in Colombo was the first time the previously lethal top order found form in 2012.

"The bowlers have been outstanding, but the batters have not got the runs we would have liked," he told ECB.co.uk.

"The Test match was normal service. We batted long periods and gave a chance to our bowlers to rest up."

England were bowled out for under 200 four times in six innings during the Test series whitewash to Pakistan at the start of the year.

This run was continued in the first game against Sri Lanka when they collapsed to defeat after losing their last six wickets for 31.

The trend was bucked in the second and final Test of the series as Cook, Andrew Strauss, Jonathan Trott and Kevin Pietersen all hit at least half-centuries in the first innings before they chased down a winning target of 94 in less than 20 overs.

Cook continued: "It was a good team effort, but Kevin was outstanding...it was a match-winning effort.

"The top three of me, Straussy and Jonathan Trott is there to give a platform for our stroke players like Kevin, Ian Bell and Matt Prior. We haven't done that on these two tours but in this game we did."

England had entered the tours with plans to build on their status as the International Cricket Council's number one ranked Test nation. Despite their struggles, Cook believes the games have been a formative experience.

"You never want to lose a Test so to lose four in a row was very disappointing," the 27-year-old said.

"We set out this winter to crack sub-continental conditions.

"But we've learnt as a side again. We've taken a few steps back but sometimes you have to do that in your career."