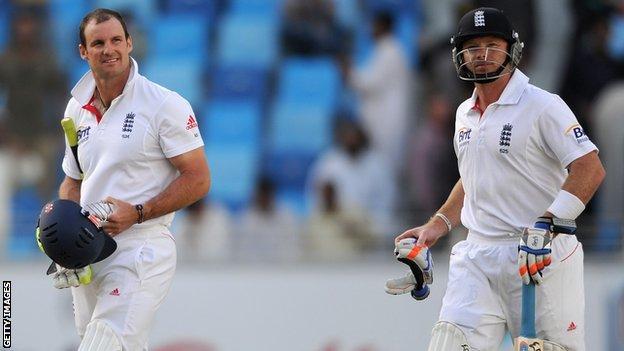 England skipper Andrew Strauss and fellow batsman Ian Bell will be given a month of county cricket to prepare for the summer Test series against the West Indies and South Africa.

The duo struggled with the bat during England's winter tours of Asia.

Both have been made available for three County Championship fixtures before the first Test against the West Indies, which begins at Lord's on 17 May.

They will turn out for Middlesex and Warwickshire respectively.

Fellow batsmen Jonathan Trott and Alastair Cook will be some given time off, with Trott returning in a fortnight against Sussex, while Cook is not due to return with Essex until 2 May.

Kevin Pietersen, who is currently on Indian Premier League duty along with Eoin Morgan, will be available for Surrey's Division One match against Worcestershire the week before the Lord's Test.

However, the bowlers will be rested after a winter in which their performances were well regarded despite disappointing results.

James Anderson and Graeme Swann will not be required until 2 May while seamers Steven Finn and Tim Bresnan will only play two of three Championship games.

First Test hopefuls Monty Panesar, Ravi Bopara and Samit Patel are available for all cricket until the Lord's match while wicketkeeper Matt Prior could start for Sussex in the tour game against the West Indies starting on 5 May.

The England and Wales Cricket Board announced on Tuesday that Stuart Broad would be out of action for a further three weeks with the calf injury that forced his early departure from the tour of Sri Lanka.